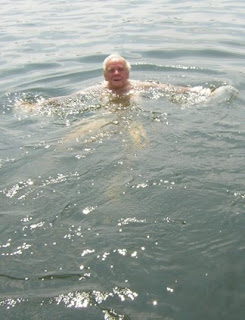 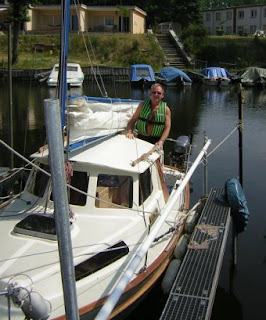 Last Friday, Rolf picked me up and we drove south east of Berlin until we reached the Wolzige See and his boot.

He needed help to work on the boot and his sons were not available, so I came on the field as First Reserve!

With an extra pair of hands we got the work done and then I was allowed to steer the boat through the channel onto the lake. 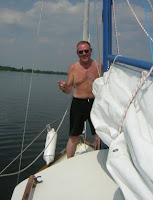 It was a very hot day, 34°C and with not much wind, but we needed to test our repair work. It was a completely different experience than my first trip on the boat last year. This time I was familiar with the dimensions of the boat and knew how to steer it. What I had to learn this time was to watch the lake top for signs of wind,  then pull the ropes directing the forward sail to make sure we got that wind, while, still steering or even preparing to tack. The back sail just looked after itself!

All went well and so we decided to stow the sails and let the boat drift on the currents as we had a light lunch. After, Rolf went for a swim as I lay back in the sun and soaked it up.

He agreed that we should have another day on the water before Autumn and me helping to get the boot out of the water. I look forward to it. 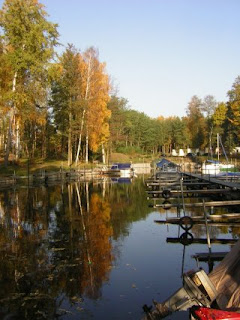 I had to get up early yesterday (Saturday) to get ready in time for Sailor Rolf to pick me up. He is the proud owner of Anja II, which I steered around a lake a short time ago and posted a report on this blog.

It was time to take it out of the water for its winter sleep.  Back in next April for another spring and summer of sailing practice for me. I dressed warmly and enjoyed the drive to the lake south of Berlin where he has his boat.

I took a series of photographs starting with a shot of the berth area from which you leave to enter the lake (Left).  There is another one of the entry into the lake (Right). Looks nice in autumn colours. I steered the boat through this channel as you read in my last report. 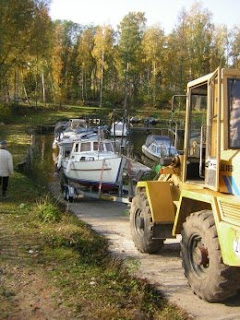 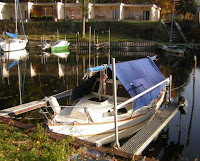 The boat is in the middle of the shot looking very lonely. The next one is of the boat with its blue protective covers on the masts and cabin (Left) . This is where it rests in summer when not in use. The next is of it being hauled out of the water by a specially adapted fork lift truck (Right). We were the first of six boats taken out of the water that day.

The boat’s trailer (on wheels) is pushed into the water under the boat then both are moved forward so the boat rests on the trailer and both are then slowly pulled out of the water and deposited in a work area. Here the bottom of the boat is cleaned of algae with a high pressure hose and lots of rubbing with rags.  There is a photo of Rolf working on it (Below – Left). This is really the hard bit and it takes longer than you think. 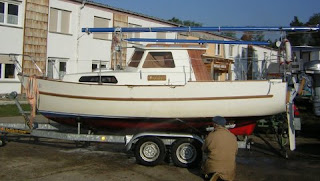 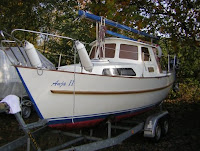 When cleaned, the fork lift truck arrives again and takes it to its winter berth. Another photo and of the boat looking clean and parked under a tree. The outboard motor was then taken off, the cabin cleaned, the decks wiped and finally the large tarpaulin set over the whole of the boat and secured. That was it! 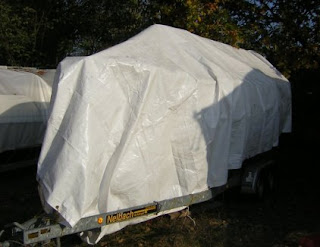 A nice day which ended when Rolf took me to a local restaurant, as his guest, for some ‘deftiges Essen’ /a solid meal. I chose Hirschbraten (roasted deer) because as we worked on the boat I could hear a huntsman in the local wood shooting,  and we guessed it was either for hirsch or wild boar.

Now to add the photos. I wonder if I shall have the same placement problems again? Yes, but I had to reduce the photos even more to be able to move them. Still don’t like the changes!