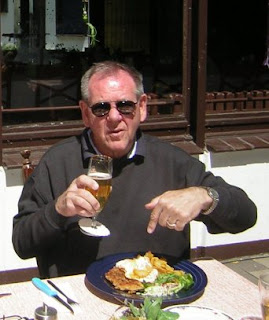 I have just got back from a cycle tour. I think I can post a report before I switch on The Box to watch the game between ManU and Barcelona. I forecast the latter will win. Their advantage is that they don’t have Rooney playing for them 🙂 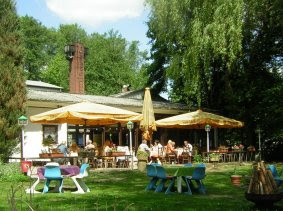 It was my turn to organise a bicycle tour so I took four Oldies on the same tour I took Andrew on a few years ago. Jan knows this tour too. I discovered it with him even more years ago. 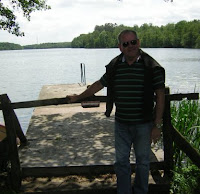 We took the S-Bahn to Petershagen Nord. Got out and cycled to Eggersdorf village. Had a refreshing coffee and chat. Cycled to Bötzsee and took the path along the side from south to north. At the top we stopped at the one and only restaurant.

I ate a ‘deftiges Essen’ which means something substantial = ANDREA – ME EATING AGAIN! It was a Schnitzel with fried egg, potatoes and salad + a small Berliner Bier. Just the thing to prepare the legs for the main part of the tour! I also posed with the lake behind me so you could see what a pleasant view I had as I ate!

We cycled onto Fängersee and stopped to admire the view. We then took the track west and landed at Wesendahl. The Oldies wanted to eat ‘Eis’ (ice cream) so we stopped at a place next to a horse riding school. 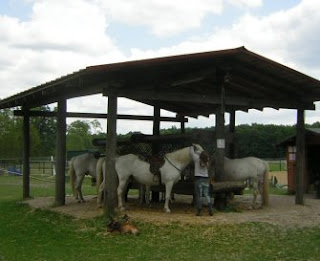 I don’t eat ‘Eis’ so I left them to eat and wandered over to where the ponies are kept. I took this shot of them. Even the dogs were asleep, as you can see. There was a little pony and a girl led it into the training area and she was about as old as Scarlett!

We then took the slow scenic track to Altlandsberg. Of course we stopped in a field on the way to have coffee and cakes which they had brought with them. Back onto the bikes and we finally hit Altlandsberg.  There they stopped again to have more ice cream but this time with fruit and cream. I just looked on!

An easy ride to Neuenhagen after the ice cream took us to the S-Bahn station and the train back to Berlin. They were all very happy about being in such nice countryside and, of course, having such a nice lunch, ice cream, coffee and snacks.

What would an Oldie bicycle tour be without these essential additions? :-))

PS: Just made it. The game starts in 4 minutes!
PPS: I was right. Barcelona 3: ManU 1. Nothing more to be said!