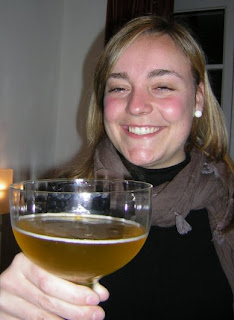 A very interesting week, which included having coffee and cakes with Jutta, Gerald and Johanna,  going to a bicycle auction and breaking a tooth – auch! . It ended on Saturday with a visit to the Berlin-Tschechow Theatre with Herr und Frau Fox. If you remember she is my German teacher.

I saw a presentation of a debate between Frederick der Grosse und Herr Müller. It is based on historical reality, but now is used as a format for political comment and farce. I understood 95% which pleased both myself and Frau Fox!

I went home feeling very happy about the show, and my level of understanding, to await the arrival of some visitors.  I got a call from ‘liebe Andrea’ to say  they would be arriving late(r). No surprise there! 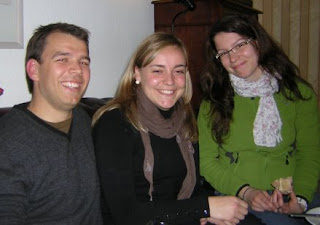 And so it came to pass that the visitors arrived ‘later’. By then I had given up any idea of setting the table for a snack/meal. After exchanging hugs and kisses, Jan, Arancha and ‘liebe Andrea’ settled into my living room. Yes, they were the advance guard of the visitors.

Jan immediately attacked the fridge for beer and asked Arancha (in Spanish – and I understood!) if she would like a beer. She said ‘yes’ and so he poured her a beer in one of my large ‘presentation/food’ glasses! Here is a photo showing Arancha holding the glass and being very nice about Jan’s ‘blodsinn’! 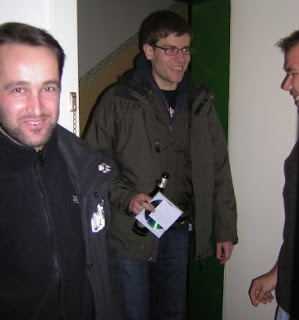 We talked a lot about Jan’s recent work on a ship north of Mumbai where he had to help in the construction of an platform on the sea-bed. That is one of his specialities so no surprises that his company had sent him to work with the chief engineer on the project.

It was a really relaxing and pleasant evening. The doorbell then rang to announce the arrival of Peter von Long-Legs and Alex. They are part of Jan’s Berlin background = school and then drinking companions! Here is a photo of them arriving. 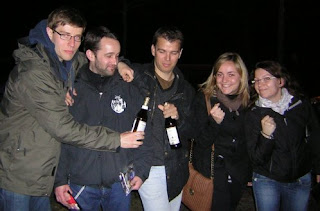 We had a really good evening with lots of food, drinks and interesting conversation. They stayed for more than the one hour they told me. They left at about midnight to go to a party somewhere in the north of Berlin. Here is a photo of them leaving me to enjoy the rest of the night in a club.

Oh, to be so young and full of energy. Me? – I just collapsed into bed as soon as they left. I had another strenuous day waiting for me!