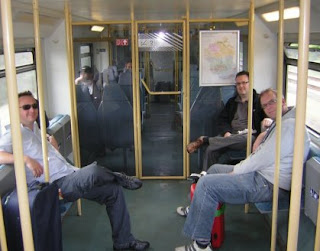 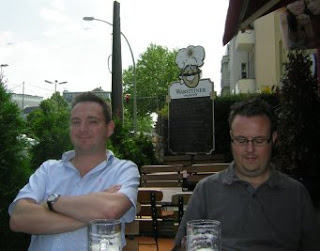 Andrew, Andrew and Kevin flew into Berlin on 1 June. I met them at the airport and took them by train to Karlshorst to pick up bicycles I had hired for them. Of course, they stopped for a beer or two on the way. And so the pattern of the next few days was set!

The first Andrew is my nephew, the second is a works colleague and Kevin was at Lancaster University with non-nephew Andrew. They are all chums and decided to leave their respective wives and children to sample a few days built around Herren Tag. 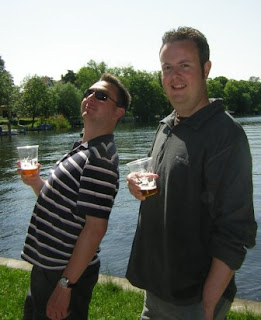 There is no equivalent in either the English language or culture. In secular society it is Mens Day, not Fathers Day, and a public holiday. It is day for men to ‘bond’ as modern sociologists would probably say. 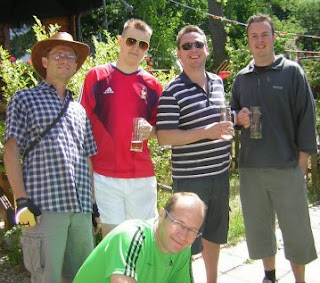 Nowadays, many men bring their wife and children and there are special festivals for all the family. Traditionally the men would set off on horses and carts, which they had decorated with grasses and flowers, for a gentle round of drinking and eating which would last all day! Not bad! 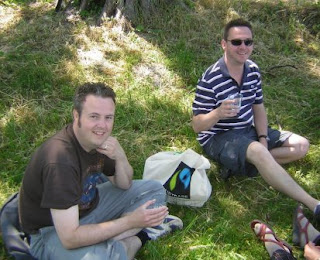 Nephew Andrew experienced this about five years ago and wanted a second shot – but with some chums this time. And so they duly arrived and next day they met my Mugglesee Gang at Erkner and off we went.

There were 12 of us from 4 nationalities and languages, but most communication was in English. We stopped at Waltersdorf for beer and Wurst (grilled sausage with mustard) where I took some photos. We then cycled north to Rudersdorf  and Lake Steinspitz where we had a picnic – more photos.

More cycling north took us to Strausburg, where the ladies disappeared into a cafe and the lads into a beer garden for ….. yes, you guessed right, for beer. Later we took a tour around the north of the lake then through woods to Spitzmühle, for more beer and sausages.

The day ended to the south of the lake at Eggersdorf where there is a popular Middle Ages Festival. More beer and sausages and then again -more beer. As the sun set, the happy gang cycled to S-Bahn Petershagen Nord to catch the S-Bahn back to Berlin. What a day!