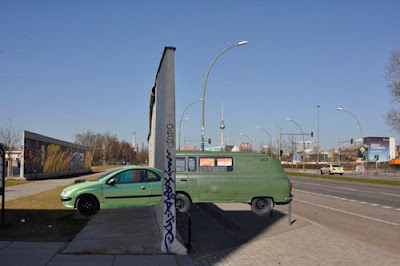 I’ve had a very routine week but it was marked by really bad allergy reactions. Since last Sunday, my eyes have been burning and red.

When I go out I wear dark glasses to spare the locals a view of my red ‘Dracula’ eyes. It was very bad yesterday and today because we are having high winds at the moment. 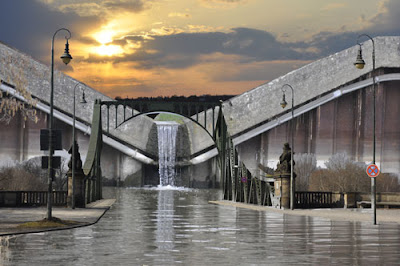 Even so, it didn’t stop me going to Kerstin’s ‘Oldie’ Fitness Group this morning and then to my Photoshop course led by Stefan.

Two member were missing, but we still had fun and started on some new work. Stefan had prepared some new photographs for us to use as background and to cut out images. 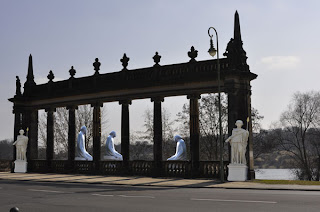 He created some images to show us how to do the work. One clever idea is of a DDR Barkas entering the Berlin Wall and the front of a Peugot emerging from the other side.

He created another one this afternoon which is a fantasy image of water and a bridge. I really like this one, and he created it very quickly.

All I managed in the same time was to cut out two images and place them in a background. One image is of the famous painter and sculptor, Käthe Kollwitz as an old women. The other is of a Greek/Roman guard. I put them into a background image. See for yourself.