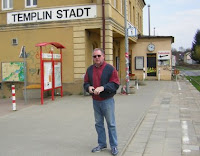 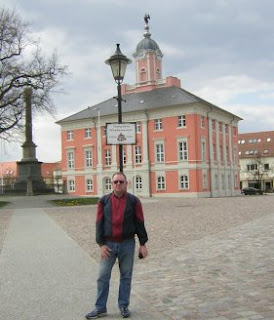 
I went to Templin yesterday. I wanted to go to Rheinsberg but the regional train arrived late, so I missed the connection at Löwenberg. Instead, I just walked to the other side of the platform (there is only one platform!) and got on the small local train to Templin.

I had never been there before. Unlike Rheinsberg, with its palace and royal connections, Templin is not high on the tourist map of ‘Must Visit’, but I liked the place. I discovered it has two claims to fame.

They are that Walter Ulbricht, the first ‘Big Boss’ of the DDR, died at a government guest house near Templin in May 1973. The second is that Angela Merkel, the present German Chancellor, grew up there from 1957. 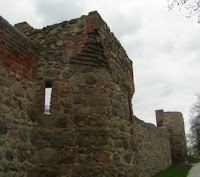 The whole area is known to have been settled by Slavs from the 8th Century, then crossing the Elbe in the 11th Century along came Germanic tribes. Templin was registered as a town in 1314, and became the centre of a large agricultural area.

A protective wall was built from 1350 which took about 100 years to complete. The wall is still intact and surrounds the inner town. It has three gates. The largest is the Berlin Gate, which you can see here in a photograph 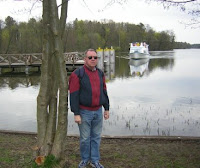 I wandered from the station to the town centre. It is built around the market square with its Town Hall building and monument to locals who died in the war against Austria-Hungary in 1864, and France in 1870-71. The monument is still topped by the Prussian Eagle. 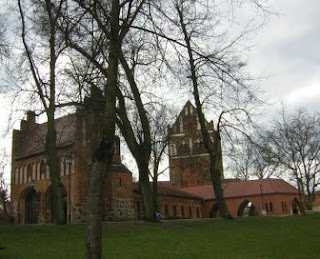 I went round the corner to a very good traditional restaurant. I ate a delicious fish dish.  From there I wandered to the nearby lake and watched a tourist boat arriving. Then back to the centre, and wandered past a collection of old buildings being restored. Later I visited the Berlin Gate.

I walked along the wall until I got to a road leading to the railway station. I settled into a comfortable seat and relaxed for a 90 minute journey through flat green land ending at the north of Berlin. Then the concrete blocks of Hohenschönhausen and Marzahn until I arrived at Berlin-Lichtenberg.

A very pleasant and enjoyable day. I hope to return when it is warmer and see more of a small interesting town and learn more about its history and surrounding area.