The first Saturday this month I went to Szczecin.  ‘Oldie’ Hermann was my travel companion. A good choice for it turned out that he knew the city very well and could show me the main sights.

Szczecin has in interesting history and is part of the story of German settlement in the old slavic speaking areas of what is now the east of Germany and Poland. It was the seat of a ‘Furst’ – this is usually translated as Duke – who ruled Pommern/Pomerania.

It figures in the expansion east under Frederick the Great and the first division of Poland. It also formed part of the later state of Preussen/Prussia. When the borders were changed in 1945, it was incorporated into the new Polish state and  formed one of its two major port-cities. The other is Gdansk. 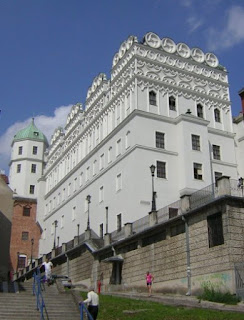 It was bombed extensively by UK-USA planes in the last war, particularly the port area and inner city were destroyed. Some fine old buildings survived, including some which were later renovated and restored to their original appearance. I was particularly interested to photo these. 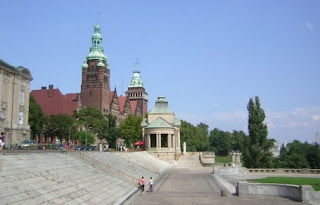 The white building is the Furst’s city palace and the large and imposing buildings go back to the Preussen days and the founding of Germany in 1871. They were used either for government, administrative, police or education – and they still are!

There is a really nice part of the inner city on high ground overlooking the river. People call it the balcony of the city. There are some nice restaurants there and we had lunch in one with a nice view of the river.

The weather was warm and sunny so there were lots of tourists. It was also in the school holiday period so I noticed a lots of families with young children. As usual, the local people were as pleasant and friendly as I remember Polish people were to me on my holidays there many years ago.