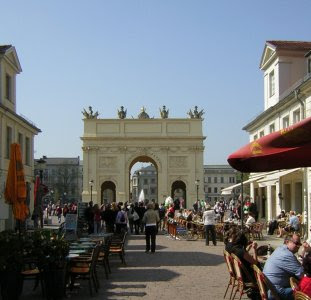 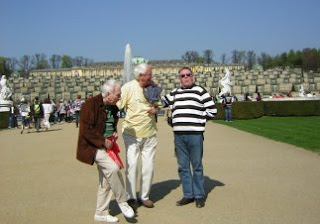 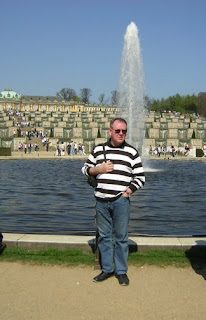 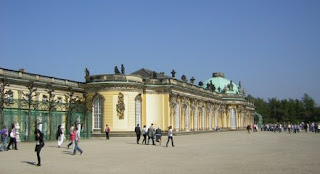 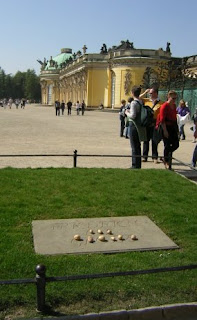 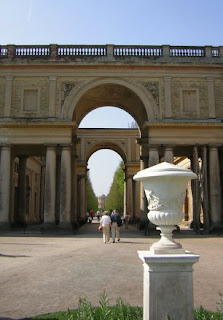 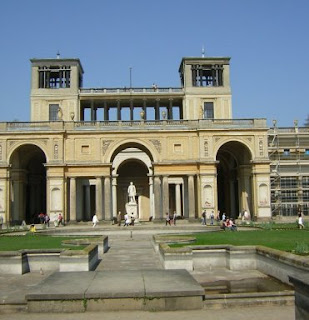 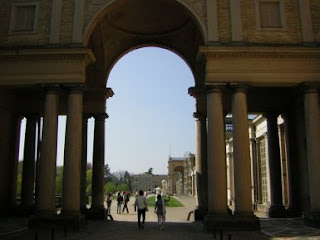 I spent Spring Sunday in Potsdam

I had a great day. I went with some oldies, heard lots of languages being spoken by lots of other visitors and tourists, enjoyed the day in wonderful warm weather with a cloudless sky. Good company, good beer and food made the day even more memorable.

This post will be made up mainly of photos for I am thinking of family and friends who have never been to Berlin/Potsdam and may enjoy the scenery and architecture more. We followed the standard route from the station into the centre and along Hardenberg Straße with the Brandenburg Gate at the end. It is not as grand as the one in Berlin but it looks just right where it is. Behind it you enter the gardens to Sans Souci with its palaces and other buildings.

There is a photo of a grave stone with some potatoes on it next to Sans Souci Palace. It is the grave of Frederick the Great and his horse was buried next to him. No-one could tell me why but they said the potatoes commemorated a famine when Frederick opened his stocks of 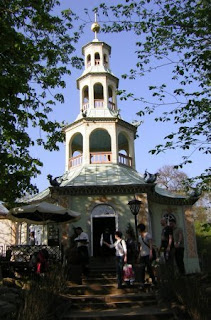 potatoes and gave them to the hungry locals. One is never sure of such stories but north Germans do like potatoes – good job they were found in south America in time to feed the hungry in places like Brandenburg. 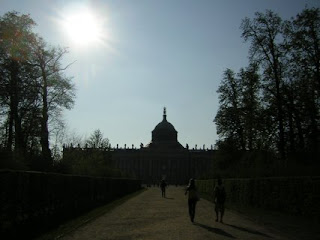 buildings with pillars and arches. At the end is the Pagoda, which every self respecting monarch at the time had to stick in their park. There is a Chinese Tea House in the park but not near the pagado. This was built on the same sunny south facing slope as the Orangerie. It is now a very good restaurant with lots of tables under the trees and on the terraces.

We had an excellent meal and some drank a beer flavoured with fruit juice, which was originally brewed in the Flemisch areas of what is now Belguim and brought to Potsdam by settlers encoured to move there by offers of land, housing and work as a means to re-populate the area after famine, war or both. It is not really to my taste but okay on a sunny relaxing day.

After feasting we wandered into the park near to the New Palace, built to celebrate the first break-up of Poland, which is probably why I never really feel at ease there even if you have to wonder at the architecture and construction style. I took a photo into the sun and like how it turned out.

There was later another stop for beer and other light refreshents before we entered the train back to Berlin in the growing shades of evening. I very memorable day for me including some of the new German phrases and jokes I heard!