On Monday morning we took the ski bus into town. I bought a ski pass so I could use all the lifts to get up the mountain. I also got myself ‘kitted out’ with carving skis, ski boots and sticks. Unfortunately I had problems and had to change them later.

I joined a three day ski group and set off to find them at 11:30 in front of the restaurant next to the top ski lift. 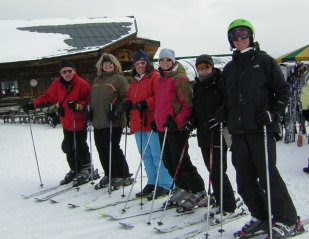 They were a really pleasant group and we got on well with each other from the beginning. It helped that we were about the same level = not beginners but needing to improve skiing technique.

We had a very experienced teacher, recommended by Ian and Birgit, whose name was Herbert. He spoke in the local dialect which sometimes confused a young lady in the group who was from Belgium and only had basic German.

Even so, we all did what we were told and learned a lot from him. Here is a photo of Herbert keeping out the cold by having a ‘swig’ from my ‘Flachmann’!