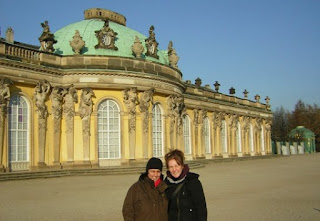 Yesterday morning Sarah and Reena had a relaxing breakfast at their hotel then went on a tour of the main tourist places in the centre of Berlin. We met up in the early afternoon and caught a Regional Bahn to Potsdam. Reena really liked the local double decker red trains = Regional Bahn. 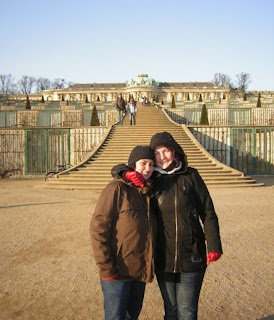 During their stay in Berlin, we had cold weather but with blue skies and sun shine. Fortunately, they read my earlier e-mail warning them of the cold weather, and came with suitable warm clothes. They needed them in Potsdam! 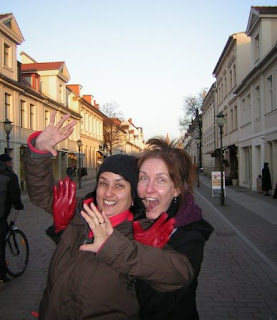 Reena is very interested in the history of Berlin, and its area, so it was important to take her to Potsdam. We caught a bus to Schloss Sancousci then walked around this small palace and its gardens. I took a number of photos as I told them something about Frederick the Great, and they saw his grave just outside his small palace. 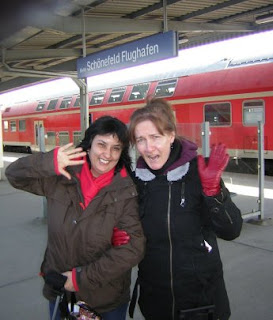 We walked through part of the gardens then turned back towards the centre. I showed them the other Brandenburg Gate = in the old centre of Potsdam. There is another and more famous one in Berlin! We then walked along Brandenburg Straße, where they stopped for ‘Kaffe und Kuchen’ in the traditional German way. You can see them waving in this street.

We made our way slowly back to the railway station where we took an S-Bahn back to Berlin. We got out at Charlottenburg. I took them to the institute where I teach on the Ku-damm, then around the corner to a traditional German restaurant. They really enjoyed the atmosphere and food. 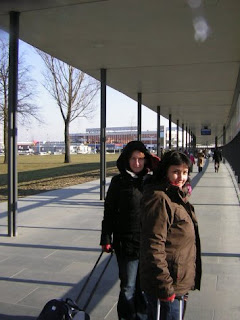 Today they finished their visits to tourist sites and museums in the morning. We met on the train to the airport this afternoon. See photo of them with the sign Flughafen Schönefeld, and another double decker red train that Reena liked so much. I took another photo as they walked under the glass covered walk-way from the railway station to the airport.

In all the excitement of farewells I forgot to take a pic of them entering the check-in area. Then they were gone with lots of waves and happy smiles. They are driving home to London as I write this and now have to think about work tomorrow.

Happy memories of a short but very pleasant visit to Berlin. I shall miss taking you around parts of the city. Come back in summer when it is warmer and all is green. It all looks very different then!