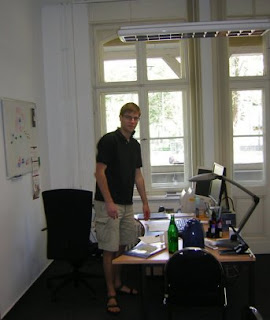 The day after my Schlaubertal adventure, I took the S-Bahn to Griebnitzsee just outside Potsdam. I had arranged to meet Peter von Long-Legs. He met me at the station and we walked to his office. 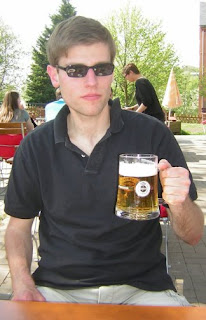 He has passed his Diplom and got an MSc from an American university, like Jan, and is now studying for his Doctorate while working as a part-time research assistant to the Economics Professor.

We had met at Jan and Arancha’s last visit but had no time to really talk to him about his life there and new responsibilities. He recently had a birthday so that was a good excuse to meet up.
He showed me his office, where I took these photos. Very nice! We then went for lunch where I took another shot of Peter mit Bier! Also nice.

We caught up on news and had a good talk about his Doctorate and research assistant responsibilities. I gave him a few tips, which he found useful, and we agreed to keep in contact more often as he works further on his Doctorate.

A very pleasant day. I still like being in an academic environment. I wonder why 🙂 Thanks Peter!