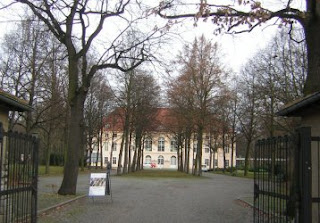 From the Soviet War Memorial I wandered through the woods and down the park into the area containing Schloss Niederschönhausen and its garden. The River Panke flows on its southern side forming a natural border. The Schloss has an interesting history which reveals some long aristocratic names!

In 1662, Countess Sophie zu Dohna-Schlobitten (you really couldn’t invent a name like that 🙂 of the Holland-Brederode family acquired the lands of Niederschönhausen and Pankow. In 1664, she had a ‘manor’ built there in the ‘Dutch’ style. In 1680, it was acquired by General Joachim Ernst von Grumbkow. 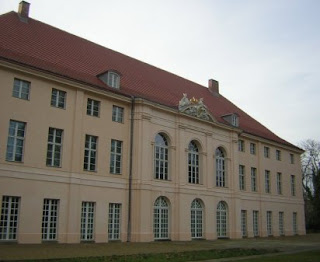 The Prince-Elector got the workmen in and from 1691 to 1693 they changed it into a ‘palace’.  After the Prince-Elector of Brandenburg crowned himself King of Prussia (an area of Poland) in 1701, he sent the workmen there again. In 1704 they enlarged the house and gardens. Making yourself a king meant you had to have bigger status symbols.

His grandson, King Frederick II of Prussia (generally known as Frederick the Great) gave the property to his wife, Queen Elisabeth Christine von Brunswick-Bevern (1715-1797) who used it as a summer residence from 1740 to 1790. Frederick never visited her there, in fact he hardly ever saw her. It is believed to have been a marriage of convenience. When he wasn’t at war he was chasing a soldier around the bedroom and not Elisabeth Christine! 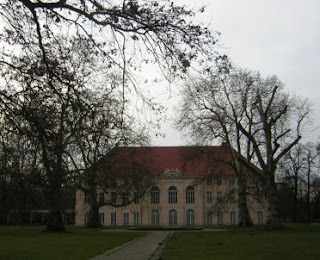 During her period of ownership, the house was rebuilt in 1764 to its current shape and the gardens were re-modelled in the French rococo style. The gardens were changed again in the 19th century to an English landscape garden.  Later Prussian Kings lost interest in the property and it was often used to store furniture from other palaces.

The house and garden became state property in 1920. The house was slightly damaged in the war but repaired so that it could be used as a club for Soviet officers then as a boarding school for their children. The property was given to the new DDR state by the Soviets in October 1949.  It became the official seat of Wilhelm Pieck, the first President of the DDR until his death in 1960.

It was then used as an official government guest house for visiting Presidents, Kings etc until re-unification in 1989-90. In 2005, renovation work started and when finished next year, the house and gardens will be open to the public. I hope you enjoyed this little historical gallop and now for the photos I took. One is a view of the back of the building, one of a close up of the front and one of the house and garden.