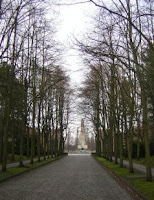 On Saturday I took the S-Bahn to Schönholz and walked towards the Volkspark Schönholzer Heide in the district of Pankow.  Pankow is in the north of Berlin and takes its name from the river Panke, which is west-Czechisch for a small river with swirls in it. The things you learn by reading this blog!

My second job when I came to Berlin was at a school in Pankow, near to the Town Hall, and my boss was Birgit Gast. I never really explored the area for I was more concerned with the route to work from the S-Bahn and local shops. Last Saturday I decided it was time to learn more so I set off to explore. 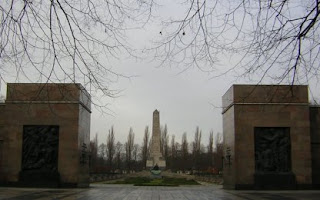 The Volkspark is shaped like an L with das Pankow Sowjetische Ehrendenkmal (The Pankow Soviet War Memorial) right at the top of the L shape. I started my tour there and later wandered through the park and turned into the bottom part of the L shape to visit Schloss Niederschönhausen. This is one of thirteen localities that make up the administrative district of Pankow. 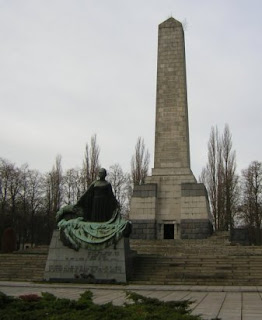 Most people I talked to didn’t know there was a Soviet Memorial in the north of the park. They know about the larger Treptow Memorial  (I posted photos of a visit there to this blog some time ago)  and the small ‘cenotaph’ near to the Reichstag  and Brandenburg Tur.

The Soviet army assault on Berlin started on 16 April 1945 and ended on 2 May. The war ended on the 8 May 1945. In the Berlin assault, 22,000 Soviet soldiers were killed. I don’t know how many thousand were injured. Of this number, 13,200 are buried in the Pankow Memorial grounds.

I was reminded of the Treptow memorial as I approached, but the Pankow one is smaller and has less of a pompous military appearance. This is due to the simple obelisk monument and the figure of ‘Mother Russia’ holding a dead soldier in her arms which dominates the memorial area.

You approach it from a road, walk down a tree lined avenue and enter the area through two side walls with engraved figures. I hope I can present the photos I took in the right order.