I went to the opera and bought another book today

Yes, Angelika called me late yesterday and said she had a ticket for me to go to the dress rehearsal of a new production of Tchaikovsky’s opera ‘ Pique Dame’ at her ‘komische oper Berlin’. I immediately said, ‘Yes’. After a round at my ‘Wellness Club’, I arrived at the ‘Staff Entrance’ and got my ticket.

The opera is very much of its time and place and even if you hadn’t known it was written by Tchaikovsky you would only need three minutes into the overture to work out who the composer was. The themes explored are very interesting and certainly are as relevant today as they were when he wrote the work. The musicians were first class and most of the singers, but not all. 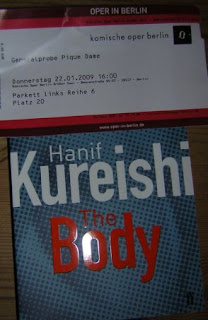 The ‘heroine’ was too old and almost the tallest on the stage. Even though a wonderful voice I just could not take her seriously in this role and kept imagining her as one of Wagner’s heroines – striding across the stage with a spear is certainly something she could do. The hero had a bad cold, and the director apologised for this at the start, but with all sympathy it did not help to see him moving about on stage, including opening his mouth, to hear nothing but the orchestra! Even so it is worth seeing and I enjoyed my nearly four hours of escapism this evening.

On the way home I stopped at Jokers bookshop near Friedrichstrasse S-Bahn and looked for an English novel to give to Dr Birgit, but found nothing for her. I did, however, find an interesting one and the main story is about, “an ageing playwright accepts a tempting offer to have his mind transplanted into a younger physique – with dire consequences”.

Sounded interesting and I have tried to imagine what it would be like to put my ‘old’ brain into a younger body, but then I know it wouldn’t work for each generation has to make the same stupid mistakes. That’s life!

Jan has updated his blog since he returned to the USA and I saw some nice photos. I think I shall visit his site again and ‘borrow’ a few for my next blog. Cheeky!