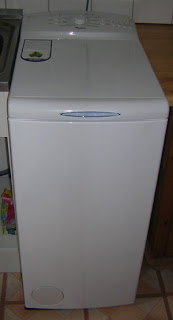 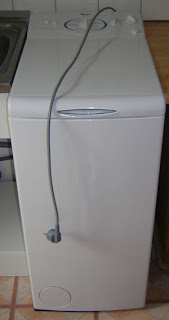 Yesterday I bought a new washing machine. It’s on the right. The old one is on the left. I started to have problems before I went to New Orleans and in fact had to wash clothes for the journey in a ‘Washeteria’. I washed them again just before I left for Berlin, but being down to my last pair of underpants and socks, and not wanting to face another few hours at the ‘Washeteria’, I decided to get the money from under my mattress and buy a new machine.

It is a newer version of the old one produced by Whirlpool, but with a better protected drum-lock. The old one broke off and set in motion a lot of problems ending with it not working. It was delivered at 6.00pm yesterday, as I was in the middle of preparing photos to update this blog. The mechanics found that the ventil/valve was blocked and so didn’t allow water to flow to the machine (Berlin water is full of chalk!) but they kindly replaced it. They also found the rubber band that drives the machine had split. Mmmmh….and it was only three years old!

I filled up the machine and off it went. Now I have clean clothes drying on the balcony. As my ‘smalls’ were washed, I listed to music, did more computer work and then watched football. I think all males in Germany between the ages of 12 and 92 also watched the match. I thought of one in the north of Spain  and am certain he had his head ‘glued to the box’. Right, Jan?  Bayern played Milan for the European Cup and as expected, Milan won 2:0. Germany is in mourning today!