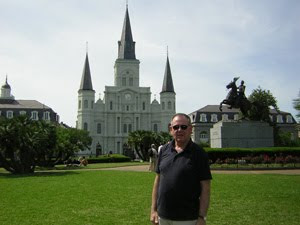 Rita picked me up at New Orleans airport – it is called Louis Armstrong International Airport. I wonder if he would tootle his horn at this? I was ‘over-tired’ and very pleased to see her. After settling in, I set out to explore the city by streetcar, bus, bicycle and feet! 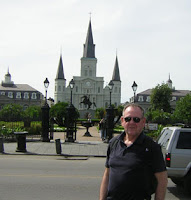 New Orleans sits between Lake Pontchartrain to the north and the Mississippi River to the south. Most people think it is located on the Gulf of Mexico. It isn’t. It is 85 miles up-river from the mouth of the Mississippi. 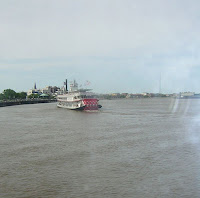 In 2005,  Hurricane Katrina did not hit the city, as most people think. It passed the city and hit the lake. This pushed huge amounts of water to the south and into the city swamping all but the high ground on the north bank of the Mississippi. This is where the original French settlers built the first settlement. Clever people!

The old centre is built on a curve of the river. There you will find the cathedral and palace where the governors lived. The French Quarter was built to the east of the old centre and this is where the famous Bourbon Street is. It housed the traders and merchants who organised trade in slaves and sugar – and so became very rich! As did the plantation owners up river.