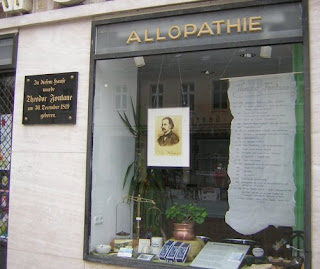 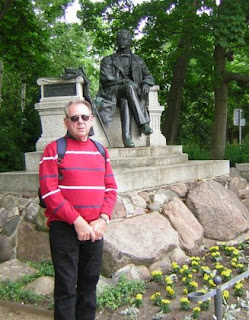 Yesterday I went to Neuruppin with Oldie Hermann. All planned late because of the weather. It changed here suddenly from 30° C to 16°C and with cloud over the weekend. We worked out a route involving 3 S-Bahns and a regional train to get there. 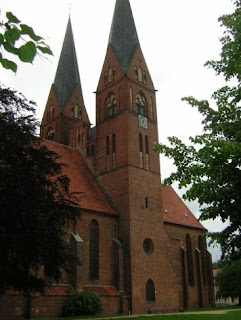 A pleasant journey as I remembered that I had been there with Marita about ten years ago, but in her car! The town is built on the west side of a long lake called Ruppinersee. Its modern claim to fame is a writer called Theodore Fontane.

He was born there. I have a photo of the front of his birthplace. It is his parents chemist’s shop! He was a busy student and also became a chemist but his passion was writing.

Later he moved to London where he worked as a journalist. On his return to Germany he published a series of books that made him famous. 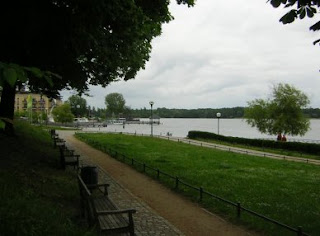 The one that all school children have to read, or so Hermann told me, is the one about his travels around the German Federal Sate of Brandenburg.

In German it is just called Land-Brandenburg, or Mark-Brandenburg based on its Roman name. This is not to be confused with the city called Stadt-Brandenburg, which I recently visited.

On arrival yesterday, I went to the tourist office and got some information and a nice clear map of the old town making up the centre near to the lake front. After a coffee, we set off to explore the old centre.

Actually it is not old for it burnt down a number of times, so in the early 1800’s, the King told a famous architect called Schinkel to prepare plans for a new centre. This architect was also responsible for a lot of building  in Berlin after the end of the Napoleonic Wars. 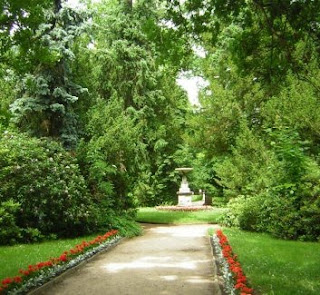 Parallel wide streets with imposing buildings became the style of the old centre. Fontane was born in the town after re-building and becoming a military and administrative centre. In 1945, the Red Army used it as its main base north-west of Berlin until 1990-91.

The photographs show Fantane’s birth-house, me in front of a statue of him, the old Kloster-Church on the lake front, the promenade on the bank of the lake and the Tempelgarten. We had a very nice lunch at a family restaurant opposite the Kloster-Church. Local fish — of course!

Sorry, Andrea but I forgot to have a photo of me eating again :-)) I know you like these!