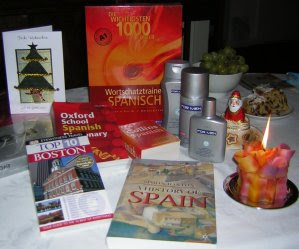 I had a ve 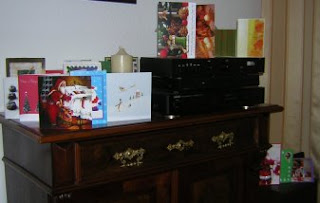 I was rather surprised at my day after a splendid evening with Marga. I got up late and got slowly into the day starting with only coffee for breakfast. I cleaned the flat and did a few things then prepared the food for the evening meal. As I was about to shower, Micha rang the bell. I set him up with coffee then showered and put on relaxing lazy day clothes = rather old and baggy!

We chatted and I showed him other things about the internet, for as you should know by now he is starting an Internet Course for Seniors in just over a week. He decided not to set up an e-mail account but wait to do this in the course.

I started to cook and then Hermann arrived on time from his job at the Bauhaus Museum. He told us that there were a lot of visitors today including many from England – which I found rather surprising. They ate my food with relish and gusto which pleased me then we relaxed in the living room over coffee and/or wine and opened the presents.

I took a photo of the nice presents I got – nice to see the Spanish influence and the book about Boston from Jan as a preparation for my visit in early summer. I also want to have a good look at New York but this is for another report next year. I also took a pic of some of the many cards I received which still surprise some German friends for sending cards is not as common as in the UK.

Dennis called me over skype to my mobile phone which was a surprise to me for I didn’t know you could do that. We agreed to talk over skype tomorrow when I have more time and no guests. He is staying with his family in Wisconsin having traveled from his house in California and having a break from work and preparing for the arrival of his wife and the boys in a few weeks.

I also got calls from Bea and Lars and some nice e-mails. Very nice and relaxed day with lots of jokes, smiles, my cooking and a few glasses. Better than I thought it would be.