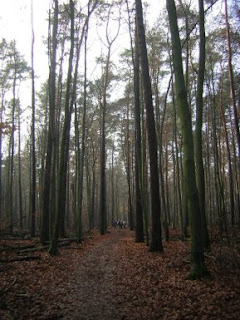 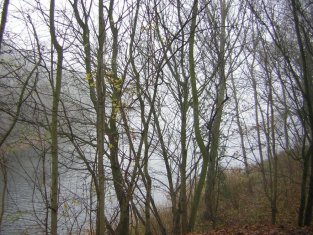 So what did you do yesterday?

Yesterday I joined a gang of Oldies at S-Bahn Lichterfelde Süd to a walk along part of the Mauer/Berlin Wall that ran from there to S-Bahn Wannsee.

This was planned about a week ago and the weather forecast was for a fine day with mist in the morning leading to sun and blue sky in the afternoon. And so it was.

I  think that was the reason why so many Oldies moved themselves and got onto the public transport system to arrive at the meeting point for 10:30.

I have never seem so many in a group – even more than Frau Backmann’s trip to Rostock last summer. A gentleman called Wolfgang introduced himself and said he would be leading the group that day.

I liked his next comment of, ‘We are not here to race along but walk and enjoy the views. There will be two coffee breaks and a room has been booked in a restaurant at the end.’ Now that is what I call organisation and just the right approach. I smiled! 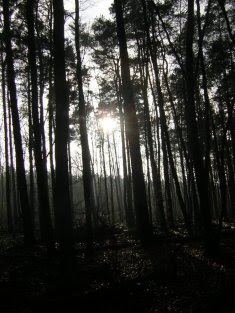 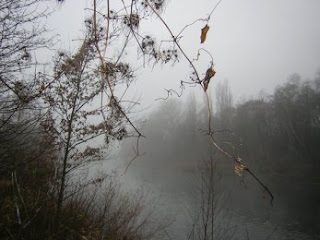 I took a number of photos as we walked along the Treptow Canal and I really liked one of the mist hanging over the water and a branch in the foreground with drops of water collected from the mist. I also took one of the sun starting to shine through the trees as noon approached and the mist cleared. 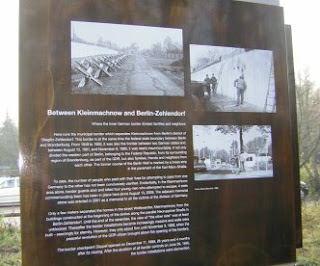 The group stopped at a memorial for the second coffee break. I also took a photo. The rusty metal one is to four young men who were shot trying to cross to the west. The stone one was added later to remember all those who died trying to cross from east to west. If you walk along the ‘Mauer Weg’, which is signposted, you will see a number of such memorials. 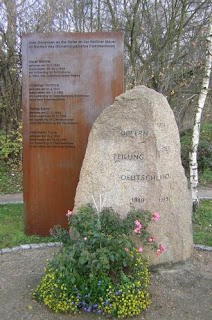 Just before our final stop we crossed the main Berliner Ring Autobahn and I took a photo of a Cafe/Restaurant/Filling Station with a large parking area at the side. This was the border crossing before 1990.

The travellers from the West had to stop here for checks by the DDR Customs and Police. It all seemed like a distant world to me but for most of the Oldies it was something they had experienced and was a real part of their lives. 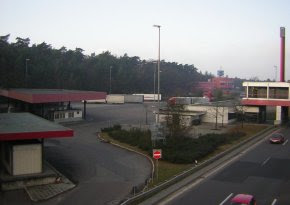 And so to the restaurant newly opened at S-Bahn Wannsee. It is run by a Russian family and we found the service and food to be excellent. I can certainly recommend a stop there to anyone travelling in the area.

The day ended as the sun went down. We all slowly moved to our different trains to take us to our homes in different parts of the city.