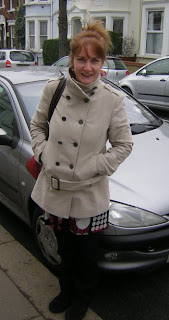 I spent my last day with Sarah

I first met Sarah when I returned to university after a long research stay in India in 1984. I was housed in a uni house and she was also there – also with Tessa who was my neighbour. What a time! We have kept in touch over all these years including three trips she has made to Berlin.

On Sunday morning she arrived at 11.00am in her little Peugot. Adrian also arrived by car for he had taken his son to play rugby with his school team, but we left the cars and walked to a nearby bistro-cafe where Charlotte works for pocket money.

We met Tanja and they all had a splendid late Sunday morning breakfast – served by Charlotte. I didn’t for I had had breakfast in my Guest House. It was very ‘English’ but had a certain charm and I would stay there again. We later ended up at their house for a late coffee and so Sarah and I left there for the last part of my stay. We drove in suberbs to the north and then north east towards the airport. We took in Hampstead and some other old interesting green areas before 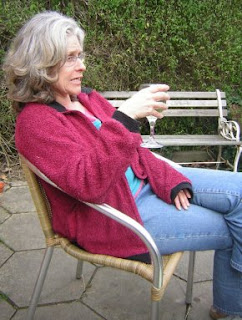 we hit the home of Agred.

She lives in a nice large house and garden with her husband and two daughters. Really natural and although it was the first time in their home I felt I had been there forever. The girls were experimenting with baking a number of thing and mother just let them do it and gave gentle supportive advice at the right time.

We, of the older generation, retired to the garden to sip a light white wine with ‘nibbles’ and catch up with news. Yes, in the garden for the whole weekend I was there was like being in Spring. Very unlike the cold winter weather I had left in Berlin. I really had to tear myself away from such a gentle, friendly atmosphere back into the car and then the last leg of my journey.

And so the long, boring, sitting around waiting for the flight back to Berlin. A super weekend, apart from the flights, and wonder what the next ones will be like in May.