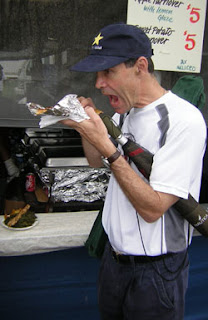 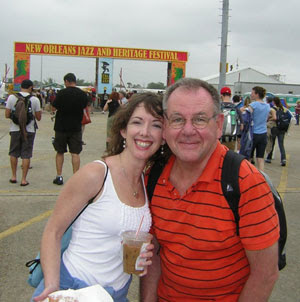 Just north of ‘Mid-City’ you will find a green area called ‘ Fair Ground Race Track’. It is the city racetrack for horses and there you can enjoy the ‘New Orleans Jazz Fest’ each end of April/start of May. It is held over two weekends and started in 1964. 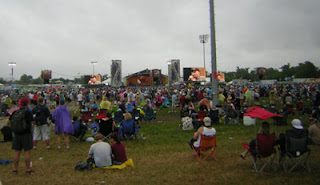 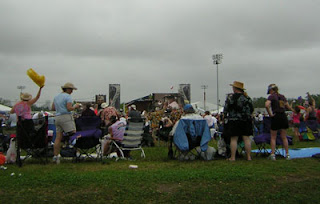 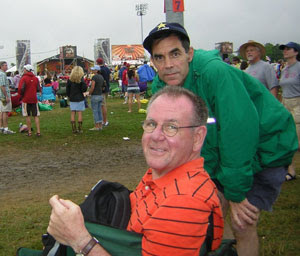 It has now become an institution where musicians gladly present their musical skills. We all went on the last day, Sunday 2 May. As you know, I am a classical music fan but I grew up in the post war world of US dominance, including its music. 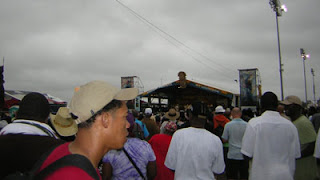 I can remember the late 1950’s/early 1960’s  of Fats Domino, Bill Haley, Big Bands and Elvis Presley. A range of ‘cruisers’ led by Frank Sinatra and the local UK grown rock and rollers with strange names.

All influenced local UK bands particularly the Rolling Stone and the Beatles. Not least of these influences was B.B.King and ‘The Blues’.

The racecourse area was divided into different musical areas ranging from the big open air section to smaller venues in large tents. You could just wander around from one musical event to the next with stops for tasty snacks. See Tony snacking! 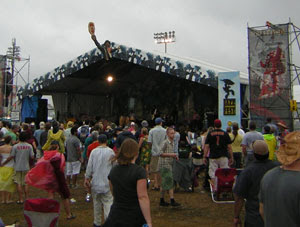 I wandered around the area all the time for I didn’t want to miss anything. There is a pic of me with Tony at the main afternoon bash of Van Morrison and his band. I have never liked him or his music but I was impressed by his band. They came across as very professional and played more jazz and improvisation than I ever remembered from his records.

His audience was huge and mostly over 50. They came with well organised mobile seats, large picnic hampers, large bottles and even larger ‘joints’! I had visions of them in the Hippy Days of the late 1960’s and early 1970’s from such thing  as their clothes and how they behaved. They were re-living their collective teenage pasts! 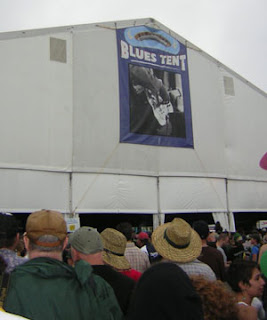 Unfortunately the organisers had put on so many classic acts at the same time to end the shows. I ran around trying to see The Neville Brothers, B.B. King, The Radiators, Maze, Ritchie Havens (another voice from my/our younger days, Trish!) Big Chief and the Big Dolls, and the strangely named Barry Grunch.

I settled for B.B.King and Ritchie Havens with some good sprinting from me between their songs so that I wouldn’t miss anything.

And so as night fell we all left the ground and moved back to our hotels or homes in New Orleans. I’m glad that I had the opportunity to attend and take part in such a remarkable musical experience.

The rest of you have to do it too, before we all exit this mortal coil! I shall never forget it.