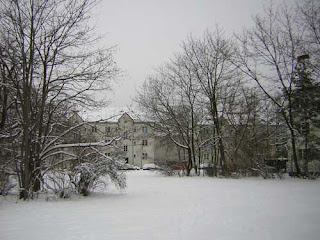 Just a few hours away from January. I am going to relax and ease my way into the New Year. I think a glass of sekt will be in order later!

Nothing great planned for January 2010 so far. Just each Monday taking Hans out and making sure he is okay. Tuesday and Thursday mornings at my Wellness Club to try to keep my left leg functioning. Teaching three students on different days, taking Micha to the Oldie computer course each Wednesday afternoon and going to my Photoshop course each Friday afternoon,  just about make up my weekly routine as I face January 2010.

On the left is a photo of the entrance to my flat. 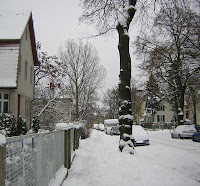 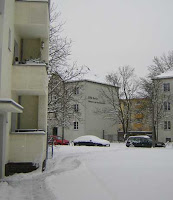 What about those of you with birthdays in January 2010? 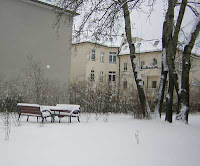 Peter Lee in Canterbury starts the year with his 51st birthday on the 5th. Daniel will be celebrating his 25th in Sau Paulo in Brazil with his family and friends on the 9th. Hannelore will be opening a bottle to share with Peter at their house in Province to celebrate her 67th on the 12th. Harald Porsch will hit 46 on the 21st, Peter Schmidt will be celebrating his 26th in Potsdam with friends on the 24th, Paul Bateson will be having a party with Beth and friends in New Zealand to celebrate his 25th on the 27 January and our dear Larissa will no doubt open a bottle of Rotkäppchen to celebrate her 47th with her family in Bernau on the 29th January.

Na, Prost alle(t)!! Have a wonderful day each!

Just going to add a few photos of the area around my flat as I write this. I thought about Barbara and Fran as I took these photos for both are interested to see more of the area where I live.  You can see that we are going to enter the New Year with lots of snow in Berlin. Even with such winter conditions, I heard on the radio that about 1 million people are expected at Brandenburg Tür for the midnight party and fireworks!