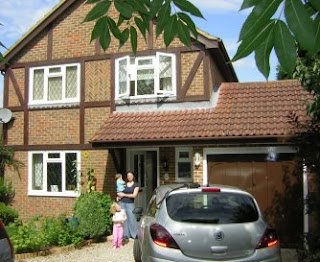 I had a very pleasant drive to Hook. The weather got better as I left Brighton, the sun shone and I really enjoyed the drive over local roads and was surprised at how hilly the area was and so green.

There were lots of large houses and I was overtaken  by two Bentley cars en route. I also noticed there were a lot of the new Jaguar cars on the road, but there were clear signs of poverty as well, even in the ‘rich’ south. 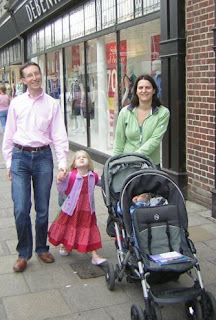 I finally found the house and met their daughter Evie (3) and son Henry (1) for the first time. I had finally reached my destination! There house was really comfortable and decorated to my ‘geschmach’! I could live there and I like the area. I had a nice room with a double-bed and my own bathroom. Very nice – I think I  shall go there again!

At first Evie was rather shy, which is natural, then she slowly began to share stories and show me toys and ask her mother questions such as, “Where does Uncle John live?”. “He lives in Germany.” “Where is that?” You get the picture!

It was a delight for a crusty oldie like me to be again in the company of very small children. It really was a burst of fresh air.

Jefferson emerged from his office to join us for afternoon tea. He has just set up his own business but is finishing a contract that takes him to Frankfurt-am-Main each week.

My visit coincided with a long weekend he had so we could do things together.  These started with a trip to Winchester where I had a ‘real’ Cornish Pasty! And learnt more about King Alfred and his Anglo-Saxon kingdom of Wessex.