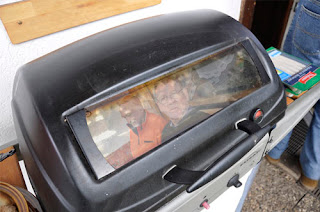 It is really cold here. Now -6°C and lots of snow. It was worse yesterday and the public transport system almost stopped working. It took me twice as long to get to my Photoshop course. Helga celebrated her birthday. She made a pasta dish so it was nice to be greeted with a plate of hot food when I finally arrived.

We chatted away and then Stefan showed us a picture he had created and he wanted us to do the same next week, but with additions. It is the grill at Family Schröder’s garden house where we met up at the end of summer. If you look closely you can see what is being grilled :-))

Stefan had updated the computers to the latest version of Google earth with the street view version. We had to learn how to use it and find different things including where we lived, and/or where we used to live. I tried Hapur at first but street view is not yet there. 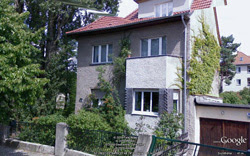 I quickly found where I live then I drove along the streets and looked at Marita’s nice house before landing in the street where I used to live. I took an image shot and reduced it for this page. It hasn’t changed much since I left, but I noticed all the images of the suburb where I live were taken last summer. Everything looks nice in summer in Berlin – even me!
—————-  II  —————-

I’m waiting for Jan, Arancha and Andrea to arrive. They are now at a Christmas Market in the centre and will call in to de-freeze in an hour or so. Decided to update my blog while waiting for them and also to listen to the debate between Christopher Hitchens and Tony Blair about ‘ Is religion a power for good – or not?’. It took place in Toronto last weekend and was covered a lot in the press. I want to hear it for myself.

The audience voted 2:1 that religion is not a force for good. What a clever audience! Anyone he knows anything about human history knows the appalling catalogue of horrors inflicted in the name of religion. I support the proposal that all religious people should go to a large island and kill each other and so leave the rest of us  finally in peace. I’ll drink to that!