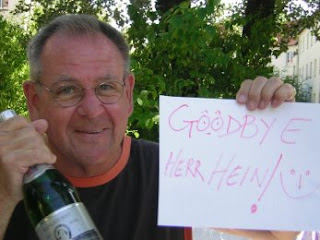 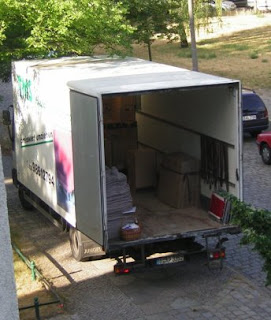 At last, Herr Hein packed his things today and left his flat.

Since February 2010, he has disturbed me and the other tenants where I live. He lived in the flat opposite mine. He works shifts and seems to have some kind of split personality disorder compounded by hard liquor. He would come home at midnight then start banging his entrance door, banging inside his flat, shout obscenities and wake everyone up. I was right in the firing line because I could hear everything.

I complained in writing to the owners in February 2009, and there followed an exchange of letters because they asked me to keep a daily record of when he ‘disturbed the peace’. There are laws in Germany about such things. I did this and nothing happened so I got a lawyer in August 2009. The lawyer sent monthly details and a demand for a reduction in the rent to the owners. You can do this under German law. The owners rejected each monthly demand. 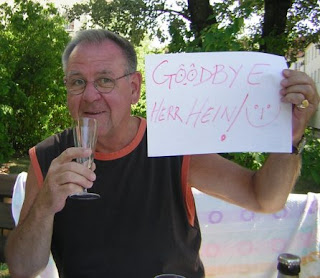 The person in the flat above Herr Hein also complained and recorded the noises and disturbances. He also called the police one night and send copies of his records to me to send to my lawyer.

And so this went on and after Christmas 2009, my lawyer began to increase the pressure on the owners to do something. This led them to threaten Herr Hein with court action and so he decided to end his contract.

The matter has not ended. There is still the issue of ‘reduced rent’ and now I am pursuing a claim against him for damages over the time I had to endure this reduction of my living qualities – this is a loose translation of the German law! I now have a new lawyer specializing in this aspect of the law, so let’s see what happens.

This afternoon I invited the neighbour, who also complained, to a little celebration in our collective garden. There we took the photos of me celebrating. The one of the truck/lorry was taken earlier to show  the packing of his things.  ‘ Goodbye Herr Hein’!  We won’t miss you at all!!