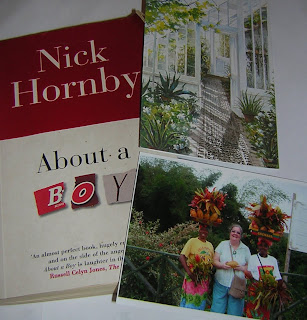 I have both! The former is not at all nice. I have canceled all appointments until Wednesday and couldn’t go to a concert with Mathias and Sylvana today. The ‘boy’ comes from the name of a book sent by sister Pauline with a note and postcard.

The book was made into a film if I remember correctly, but I didn’t go to see it because the main character is played by Hugh Grant – and I can’t stand him! Not being able to sleep is always a good time to read a book. 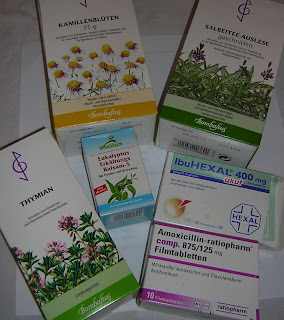 I began to feel as if a cold was starting exactly a week ago and it got progressively worse until I went to the Docs last Thursday. Got tablets but I felt really bad. On Friday night I couldn’t sleep and was burning up. I went to my Apothekerin on Saturday and she contacted the Emergency Doctor service. An hour later a doctor arrived and decided I needed a change of tablets for I had a virus.

He had worked as a doctor in Inverness, Rugby and Exeter (Cornwall) after medical graduation. We spoke in German but he was very enthusiastic about his time in these towns. I went back to my Apothekerin and got the new medicine, including three lots of herbal tea and tablets to take when I feel feverish. Nice collection as you can see from the photo.

Pauline and Lew were on a Caribbean cruise in December. I told you about it in this blog. She sent me news in the nice card showing the recently restored glasshouse at Paxton House, Cornwall (coincidental connection to my Emerg. Doc.) In the photo she is on the island of Grenada, known as the Spice Island, with a “couple of Spice Girls”. She is holding a cocoa bean. Great to see her so happy and to get news to share with you.

Now where did I put all that medicine. I need something but am spoiled for choice!