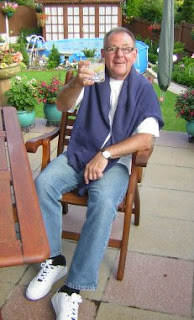 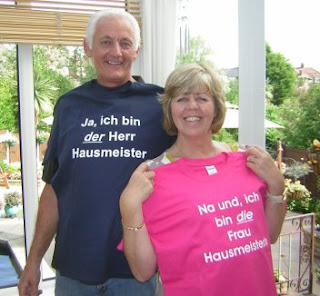 This is the start of a looooong story in about 12 parts about my recent visit to England to see family and old friends. I stayed three weeks, which is two more than usual!

It was prompted by a Christmas card and telephone call from nephew Jefferson and wife Leanne. In short they said that I had never travelled south to see their new home and their beautiful daughter and baby son – so what about it?

They were right so I started to make plans. After my gallop to New Orleans I planned a gallop around selected bits of south ‘Blighty’. Big problem was the cost of flying into the local airports – not on the easyJet or ryanair  ‘el cheapo’ routes. 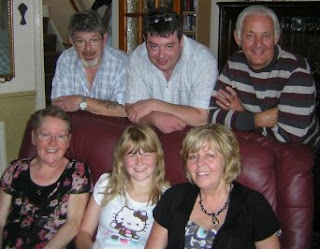 In the end I settled for my usual flight to Liverpool, then to Silsden, Castleford, Addingham, Keighley then hire a car and head south. And that is just what I did. Flights and 12 day car hire cost the same as a ‘standard’ flight! Unbelievable but true. At least I didn’t have to fly ryanair. EasyJet is bad enough but ryanair is for masochists! It must be the worst airline in Europe.

And so I arrived in Liverpool and our ‘Baz ‘n Pam’ were waiting, picked me up and took me to a local restaurant famous for its Fish ‘n Chips. Yes it had been my wish and they were very kind and organised it and so began my binging on Fish ‘n Chips and Pork Pies! I have to admit that they are the best in west Yorkshire … and I have no explanation why. They just are. 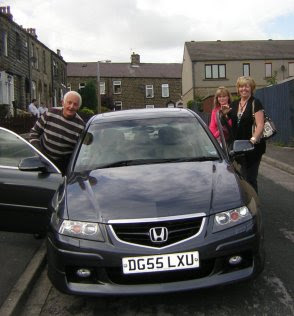 As a thank you present I gave them T- Shirts with texts in German about Barry’s job. It is too long to explain here — so I won’t! But they look nice with their T-Shirts.

FBL Geoff is also a bit of an expert on which ones are good and which ones are not. With Geoff’s help and guidance I gorged on both Fish ‘n Chips and Pork Pies when I was there. No, I didn’t end up as ‘fat as a pig’, as they say in Silsden, but came back to Berlin 2 kilo lighter! The moral of this story is that if you want to lose weight then go to Silsden and overdose on Fish ‘n Chips and Pork Pies – it works!

Now to some pics of Baz ‘n Pam, their grand-daughter, car, garden with me sipping an early G&T, then with Fran, Geoff and Warren in Silsden.  Thanks to all and each for making it a bit easier for me to adjust to the change from Berlin to Blighty!