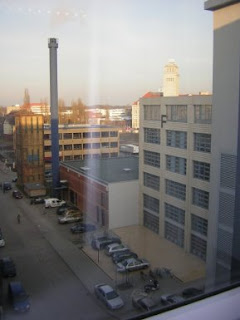 Yesterday I was feeling better, so I joined my computer gang.  Can I hear you asking who they are?  I am sure I have talked about them before, but you may have forgotten. 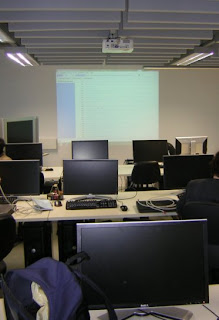 About a year ago, I saw and advert outside a community centre, which is around the corner from where I live. It gave information about a new course for ‘Seniors’ who wanted to learn how to use a computer. I can do that but I told some other ‘Oldies’ who couldn’t, and went with them for support.

I liked the group, and Ines the teacher, and am still part of the gang. We recently moved to the teaching rooms where Ines works. She is The Boss in the computer section of the HTW (Technical High School) which recently moved to a new campus.

It is part of a large college complex on the north bank of the river Spree. All of that area used to be factories. Herr Siemens opened his first factory there! 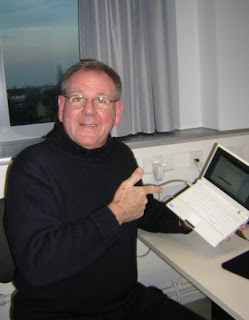 After reunification (20 years ago) the factories began to close and it looked like an industrial wasteland, hence takeover of the HTW to breath new life into the complex.

I took a photograph of part of the complex from the window of the room where we have our lessons. You can clearly see that it was an old industrial site.

There are only a few of us now, but we are always looking for new Oldies to join. There is one photo of the room looking towards the teachers area with overhead projector and all other controls. And there is one of me! I’m holding the ‘Baby Asus’.

Last week I posted that I was having some problems of compatibility between the Xubuntu OS and using Skype. No longer and the solution was easy.

I had forgotten to switch on a control button for microphones. Nothing else, so I tested it with another student and it works okay. I have now thrown it into my suitcase for I only use it when travelling outside Berlin.