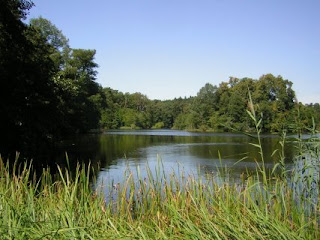 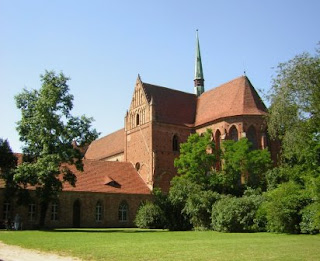 Yesterday I went to Closter Chorin for a concert. It was great!  The evening before I sat in the garden of Schloß Biesdorf.

It was the home of Herr Siemens many years ago.  Now it is a museum and centre for artistic events. I met Jutta, Johanna and about eight other family members and friends. We listened to a young lady playing five instruments accompanied by her father. A very pleasant evening.

Yesterday the music was presented by the Deutsche Streicherphilharmonie ( The German String Orchestra) directed by Michael Sanderling.  The programme was (1)  Felix Mendelssohn, Streichersinfonie Nr.1, which he wrote when he was only 16. Amazing … when I was 16, I was gazing out of the window wonder what it was all about! 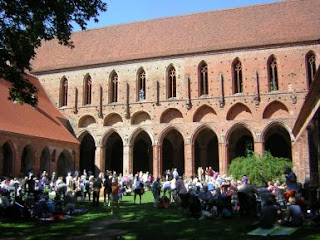 It was followed by ‘An English Suite’ written by Hubert Parry. Very English indeed. He is famous for his church music in the late Victorian Period. This piece is pure ‘English’ of spring on the Sussex Downs, tea with scones, news of the Empire in The Times and all being well with the world. The weather was also perfect.

After the break, we enjoyed a remarkable talent called Da Sol. He was born in Korea in 1989 and didn’t get his hands on a piano until he was 11 years old. Then he really made up for lost time. Although rather small in stature he made up for this with a strength of playing, which surprised most listeners, as he interpreted Chopin’s Piano Concert Nr. 1. 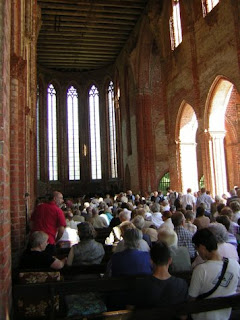 The audience was very appreciative of all the music and performers and gave all and each a lot of applause – but then very well deserved.  The combination of music, warm sunny weather with clear blue skies and performance skills was perfect. A day to remember for a long time.

The location also played an important part. Closter Chorin was build about 1250AD as the Germans moved eastwards and settled into Slavic speaking land. It was built on a lake north of Berlin. It was famous for its hospital and discovery and use of herbs in treating ailments and diseases.

It continued this work for three hundred plus years until it was closed and sold off in the Reformation. Fortunately, all the health cure recipes had been written down over the years and so were used in other centres for treating the ill and infirm.

What a pity that almost no tourists know about this centre for music for it is only an hours journey north of Berlin.  Just a reminder that there is more than Checkpoint Charlie to see when you visit Berlin – particularly in summer.

Closter Chorin was built on the shores of a lake in a wonderful forest. Calm and quite, which is perfect for recuperation after an illness and treatment.  Also a great setting for classical music. Hundreds came to enjoy the combination — as you can see from the photos!