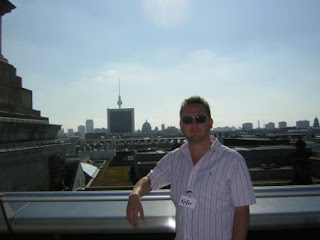 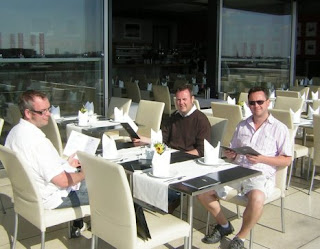 The day after the Herren Tag bicycle tour, we went to the Reichstag for breakfast. Not a bad way to start the day.  The Reichstag, in case you don’t know, is the home of the German Parliament and just opposite the Chancellors office, which is very close to the President’s Palace. 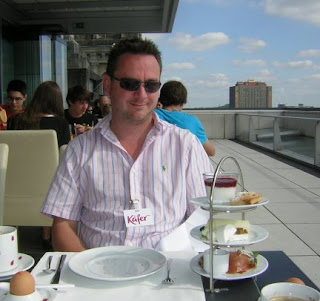 The building was re-designed in the 1990’s, after re-unification, and Norman Fosters design was accepted. It includes a large glass dome with circular walkways open to the public.

You can enter the building by registering for a conducted tour, or for a meal in the restaurant opposite the dome.

Andrew and the lads wanted the second option, so I organised it for them. They invited me to join them as their way of saying thanks for my help. I quickly and gratefully accepted. 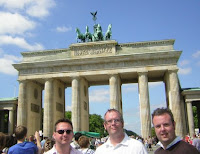 They even got there before I did. Through the security check then into the lift to the dome and restaurant. We sat on the east facing terrace = into the morning sun. Wonderful! The service was first class as was the breakfast.

They took a lot of photos and I took a few. 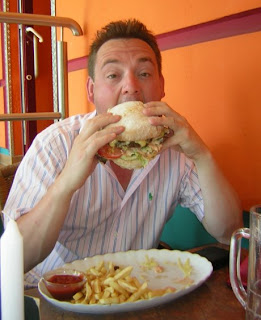 After breakfast, Andrew wanted to walk to Brandenburger Tür, which we did, then on to Friedrichstrasse and eventually to Lafayette, which I think is his favourite store. Then to Checkpoint Charlie and finally to Karlshorst to return the bicycles.

Having done that, they decided to have a beer at the Havana Bar opposite S-Bahn Karlshorst. One beer led to another, and another….and even to thoughts of food!

I could not resist taking a photo of Andrew trying to consume his lunch. He managed most of it!

I headed home and they headed into Berlin for more fun + more beer! I really enjoyed my time with them and banter with each other.

One thing I noticed was how often they used a Blackberry to send messages. I think I am too old for this ‘cultural development’! I prefer to talk face to face.