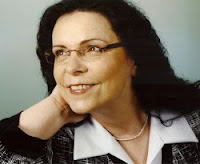 Yesterday I took the RE1train to Brandenburg again. This time it was just me, and to have a day out with Heike. Normally we meet when Heike comes to Berlin to put flowers on her sister Birgit’s grave, but this time we decided to meet in her hometown.  A very nice photo of Heike on the right! 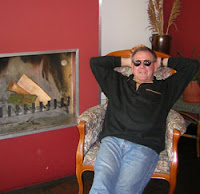 She had planned the day. We took a tram to the Marienburg and walked up the steps in the garden until we reached the Friedenswarte.

I think I need to explain that the Marienburg is the highest hill in the Federal State of Brandenburg and from the early Middle Ages had a fortress on the top. Over time this fell into decay and was replaced by a modern tower in the 1980’s called the Friedenswarte. You can climb up it 180 steps if you wish for a view over the city and surrounding countryside.

We went there for the view and the more practical reason of having lunch!
It is spargel time in Germany and I really like them with a Schnitzel and potatoes with butter sauce. Mmmmh…very nice and even better with a cool beer or light dry white wine. You can see me relaxing after the meal and posing in front of the Friedenswarte.  The first pose is of me with the steps in the garden.

We later walked through the Alt Stadt to get to the river and boat, but that is another story you can read about in the next post.