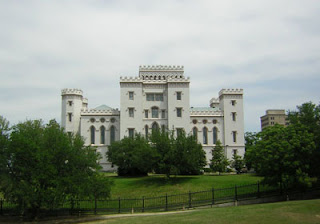 I woke up a year older in a nice motel on the north side of Baton Rouge. This is the capital city of Louisiana and means ‘red stick’. The early French explorers travelling on the Mississippi saw a red stick on a bank of the river. 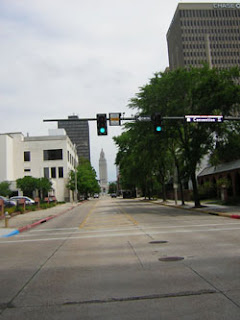 It marked the territorial border between two native Indian tribes. The explorers made a note and moved on. Later, French settlers stopped at ‘red stick’ and founded a settlement. As I opened my eyes there, I was one year older! 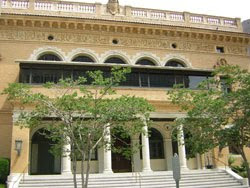 I jumped into my nice car and set off for the ‘business and government areas’, as it was described on my map. I realised the area was really ‘dead’ on a Saturday. Almost nothing was open and there was almost no movement on the roads. I like the city immediately!

I toured around then headed for the ‘Old Capital Building’. It was built in the style of a European mock castle/palace from the Middle Ages and the 17th century. What an interesting, even strange, mixture of ideas! It has turrets at the top of the walls! 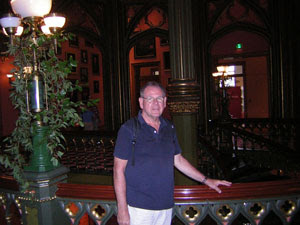 And so the building was the home of Louisiana’s parliament for many years until Huey P. Long had another built to the north in 1933-34. I found the rooms pleasant in size and the historical presentation simple and clear. Ideal for groups of school children — and oldies! There are some photos of me in the building.

After that, I found a coffee shop and had a coffee and snack before heading north to the ‘New Capital Building’.