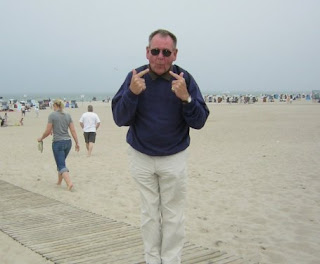 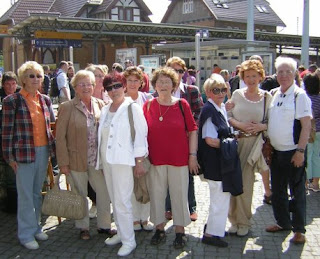 Yesterday I had a really great day in Warnemünde with Frau Beckmann’s Oldies. She is retired but works part-time in the Bau-Haus Museum, along with Oldie Hermann and many other Oldies you can see in the photos. 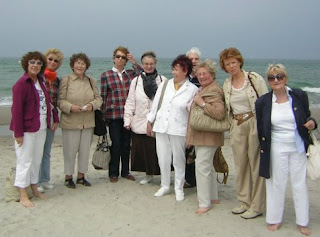 She likes to organise things – and people! – so given the sudden change in weather, telephones rang and 13 Oldies met at Berlin Haupbahnhof (Main Station) for a day of fun, sun and frolics in Warnemünde. 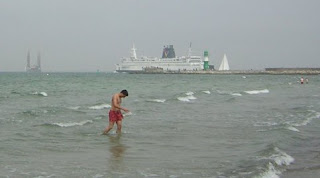 Warnemünde is on the Baltic Sea, called Ostsee in German, and north of Rostock. You may remember I was there two weeks ago with Hans. Two of the Oldies left the group at Rostock to explore the town so the rest of us landed in Warnemünde. This word means the mouth (Münde) of the river Warne. Easy isn’t it! 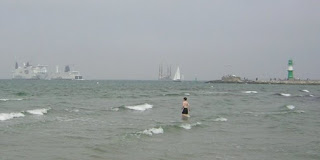 From there you can take ferries to Denmark and to Sweden (which I did a few years ago)  – as you can see in the photos – when two crossed at the mouth of the river/harbour.  When we arrived the weather was rather overcast although in Berlin it was hot and sunny. There was a belt of cold cloud rolling in from the sea and hanging over the town. In mid-afternoon the sun broke through and everyone started to smile! 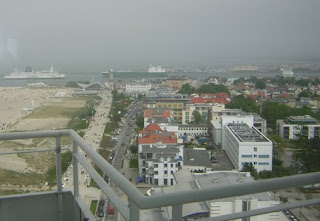 We walked all over the place stopping at the local market, small side roads with interesting little shops and cafes, then to the main area in front of Hotel Neptune. Later we went to the restaurant on the top floor (19th) and had some refreshments.

I took some photos of the town from the top floor with ships heading out and the beach and other parts of the town visible in the photo. We spent the whole day together and it was really nice to exchange views and share the day with so many nice women!