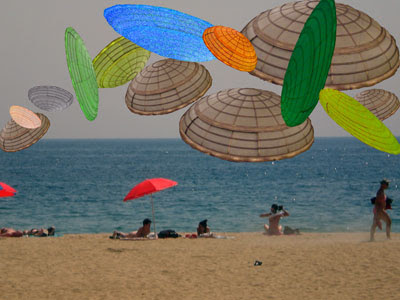 Susan is a member of my Friday Photoshop Gang. She was a professional dancer, is very slim, fit and looks much younger than she is. She also speaks lots of languages.  I can’t find a photo I took of her in ‘dancer pose’. Hope this is not a case of Demenz on my part!

She recently visited her daughter and family in Barcelona, and took some photographs. She generously offered them to Stefan to use in our Photoshop Group. We worked on them last Friday. Lots of interesting photos from which I selected two.

The first was of the opera house in Barcelona. I liked a shot which included a large round light in the ceiling. I cut it out and placed to one side. Next, I looked for a background scene and found one of people relaxing on the beach at Barcelona.

I added the light cut-out to the beach scene then played around with the form and colour of the light and so made it look like a spaceship. The result you can see here = attack of the aliens on Barcelona beach!