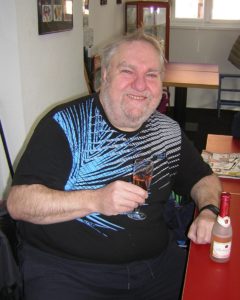 The main thing in the last week was going to two birthday meetings. The first was on Wednesday morning when I went to an AWO office. I am a member and also help any seniors who want to improve their English. On Wednesday I meet three seniors one of which is Michael. He is a beginner but gets lots of help from the other two members in the group. He is also active in local senior groups including leading a walking group each Monday. He has a leg problem and needs a walking stick but it doesn’t stop him from leading this group. Well done! After our English session a couple of people arrived and brought snacks and Sekt to celebrate his 60th Birthday. A really nice atmosphere. You can see how happy he was in this photo on the left. 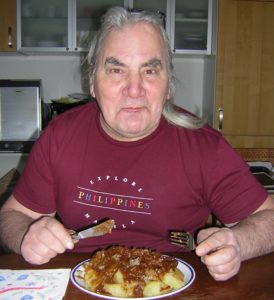 On Thursday I went to Imre’s home to celebrate his 67th Birthday. I found him reflecting on getting older and talking about his future plans. He had previously prepared a very large pan of food. It was a kind of stew. He is a very good cook and likes cooking — and I would also say he likes eating! I had a small plateful for lunch and he ate two large plates. Later his son arrived and two old friends who come from Hungary. Interesting mix of languages. One of his friends only wanted to speak English with me and so he told me about his visits to the north of India to temples for he is a member of a very old Indian Hindu group. He liked talking about his experiences there and I enjoyed listening to him sharing his experiences. He is vegetarian and does not drink alcohol so I had to drink the white wine Imre had bought which came from Hungary. It was delicious and the first time I had seen/drunk this wine. A very nice day. Thanks to Michael and Imre!