I had a nice surprise on Monday afternoon. The doorbell rang and I opened the door to see a delivery man holding out a package for me to take. I opened it to find a book inside. It is, ‘Britain’s War : Into battle 1937 – 1941’ written 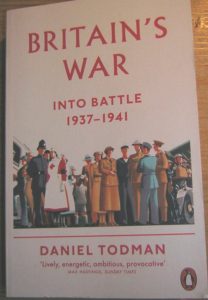 by an academic historian called Daniel Todman. I recently read volume 2 covering the period from 1942 to 1947. I thought only Ian could have sent it and he later confirmed he had.

I like the author’s way of exploring his subject and style of writing.  In the introduction he sets out his approach. Here are a few quotes: “In a way no other book has done, these two volumes join together histories that are usually told separately – strategic, political and economic, military, cultural, and social — as it prepared for war”. 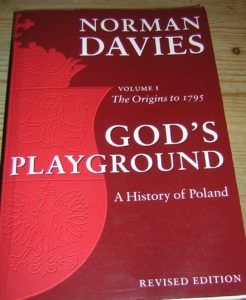 This morning I turned on my WLAN Radio to BBC Radio 4 at 10.00 am Berlin time. Just in time to hear a discussion led by Melvyn Bragg. Hi guests were three academic historians including Norman Davies who wrote two books about the history of Poland. I have posted about book 2 before. The topic today was the history of the Polish-Lithuania Commonwealth, which became a Republic from 1569-1795 when it was absorbed into Russia, Germany and Austria and ceased to exist until 1918.

In 1385 there was a personal union of crowns by a constitutional union which lasted for 407 years. The Lithuanian state was founded in the 13th century by a team of warriors. It changed its name and constitution a number of time such as  the Poland-Lithuania Republic 1569 – 1795. Some say it was the largest and strongest state in Eastern Europe in the 15th and 16th centuries. Poles are historically a branch of the Slavs.  I shall enjoy reading more history in Book 1 which will be a nice contrast to reading Todman’s book (above). Have fun with your books as the weather takes us into autumn.