I had my third vaccine injection against Coronavirus yesterday. It was at a shopping centre on the Frankfurter Allee. I had to join a queue but within 20 minutes I got my jab. My doctor insisted on speaking to me in English. I then discovered he came from a German fa 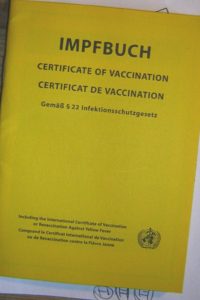 mily which moved to the USA, where he was born, then back to Germany when he was ten. He also said he takes any opportunity to speak English so he doesn’t forget the language.

I had to wait in a room for 15 minutes to make sure I was okay after the injection.  Again, no problems. The reason for the jab was that my second one was just over 6 months ago and given that, and my age, I was advised to have a third jab. The record of my injections is in my ‘Impfbuch’.

Last Sunday I watched an interesting football game on TV. It was Germany -vs- North Macedonia. The play was very even in the first half. In the second half the German manager took off a couple of the new players and put some older and more experienced players into the team. The result was Germany 4 and Macedonia 0. I think that says a lot about the quality of the replacement players – even if older than 20!