Nothing special has happened since my last post. Another ‘normal’ week but with more meetings and less via Zoom. I’ve had 2 meetings with my Physiotherapists with different treatment. I now havean A4 pap 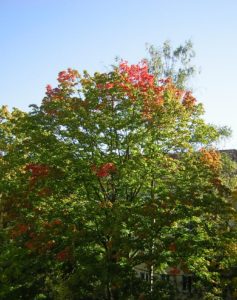 er with images and instructions about stretching and moving which I have to do each morning at home. Hope that works.

I met Johanna during the week and she helped me to understand a 4 page letter I got from my bank. Even she is critical of how ‘business and legal’ German is used and says it could all be written in simpler language and shorter. We are going to a meeting with my Mugglesee Gang tomorrow starting at 3.00pm. Looking forward to seeing them again and catching up on news.

The weather here has been really nice. Just look at this photo of a tree opposite to where I live. I really like how the leaves are turning red before falling to the ground. Tomorrow should also be sunny before it gets cooler and rains on Sunday. Guess what I am going to watch on TV this evening. Yes, you are right – a football match. Germany is playing against Rumania. Which team will I be cheering? UPDATE: Germany won 2:1   –  But— The Rumanian team were dominant in the first half and played very well throughout the game 🙂 Final Game: Yesterday evening I watched another football game. It was the UEFA Nations League Finals. Result was Spain 1 – France 2. The French team played well and deserved to emerge the winners – but then part of me would have been happy if the Spanish team had won!