I met Neil Deane yesterday. I have posted about him on my blog before. He is now a lecturer at the University of Duisburg- Essen and currently writing his 4th book. This one is a novel and I look forward to reading it at the e 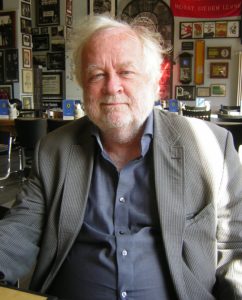 nd of the year. His 3rd book is called – Liverpool: gateway to heaven and hell. A personal odyssey. Neil was born in Liverpool and grew up there. He moved to Berlin in 1979 and it was during the early 1990’s that I got to know him through membership of the new teacher’s association. Later we lived in different flats in Scharnweber Straße and I got to know more about his experiences in Liverpool. The book really is a ‘must read’ and I can recommend it to anyone interested in the city and growing up there at the time of The Beatles and other bands.

Yesterday we met on the platform at Friedrichstraße and walked across the bridge to his favourite restaurant. Over a very tasty meal we caught up on what we had been doing since our last meeting – also in the same restaurant. He was visiting old friends in Berlin and just enjoying walking along streets that reminded him of his time in Berlin. He’s going to tell me when his new book comes onto the market for I said I would read it and send any comments back to him. It was very nice to see him again and catch up on news. I look forward to our next meeting.