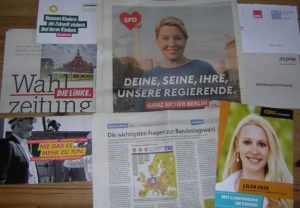 The word vote can be a noun = a vote, and a verb = to vote. I voted this morning at 11.00. There were more than one voting rooms but it was well organised and I only had to wait 20 minutes before voting. We voters had to wear masks as we shuffled towards the voting rooms/booths. This time we in Berlin had 5 different voting papers and not only for a new central government. I shall watch the news on TV later this evening to see who/which party has collected how many votes. At the moment, the news broadcasters are talking about the CDU and SPD having the same number of votes. Let’s see what the results are later. Here is a photo of some of the adverts I got from different parties.

The weather today was really nice. Lots of blue sky, sunshine and no clouds. Very nice. Last week was as usual except for Friday evening when I had two visitors I hadn’t seen for 2 years. We went to a local restaurant, enjoyed good food and wine plus lots of talking. Next week looks like the same as the last one. Hope the sun keeps shining!