I’ve had a very mixed week which I enjoyed. The first thing to note is change in the weather – perhaps its the same where yo 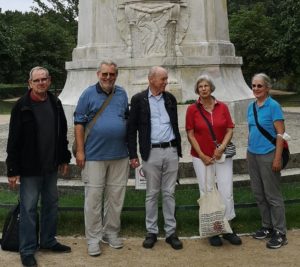 u are. We are slowly moving into Autumn witnessed by trees shedding more leaves and it gets darker earlier in the evening. In my last post I said I was going to meet a small group of ‘ELTABBERS’. I went with Johanna and we met the others in Potsdam Platz. After greeting each other we set off on a walk through parks and woods while still talking to each other and catching up on news. We entered one park to discover a number of monuments to composers. Here you can see us standing in front of the one to Beethoven – who just happens to be my favourite! Off again and then we came to a museum on the side of the River Spree and close to the building where the German Prime Minister works. We sat outside the museum restaurant and ordered ‘Kaffe und Kuchen’. There were lots of people there and lots of boats sailing past. Then we walked on and crossed the river. Later we went into a restaurant on the riverside but Johanna and I left and headed to the nearby Main Railway Station. Johanna is looking after a neighbour’s cat so had to leave early. We agreed to meet up again for another walk before the snow arrives and winter sets in.

I had two physio appointments last week and felt much better after each. On Tuesday evening I met oth 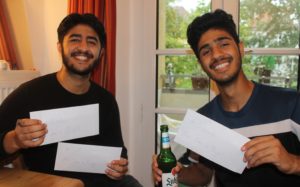 er Berlin Labour Party members via a Zoom meeting. I have another two Zoom meetings scheduled for this weekend. I also watched two football matches via TV and enjoyed both. On Tuesday afternoon I started a new English group and another one on Wednesday morning. We are now into September so people are returning from holidays and joining such groups. I know all of them from courses before the onset of Corona cancellations. Nice to see them back again and listen to their adventures during summer – but only in English! Johanna visited this morning and helped me with some paperwork including trying to understand some words of 30 or 40 and more letters! Civil Service German is not so easy to understand even for many Germans. I also had a visit from The Boyz. Ian and Birgit had sent some money for  them and their sister and so I handed it over and made them smile …. and smile! Were they happy! They have just started new schools/colleges and need more books, sports clothes etc. Here you can see them smiling:-)