Last week went as planned except for Friday. I met Johanna and Martina as planned but we changed our walk. At m 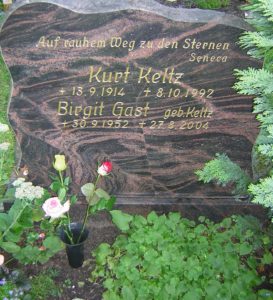 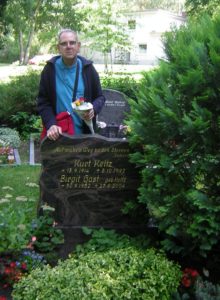 walked to the ‘Socialist Graveyard’ which is north of where we all live. It is famous for the memorials to Rosa Luxemburg and Karl Liebknecht. Hundreds of people gather there each January to remember them. In the centre of the graveyard is Birgit`s grave. It was 17 years since her untimely death. I bought 3 roses on the way: 1 from me, 1 from her sister and 1 from her son. I put the flowers on the grave as I told her how much she is still missed. We then walked north through the graveyard for it has a lot of trees and parts of it look like a park. We then took a tram back to our starting point and went into a newly opened Armenian restaurant. I ate fish which was very tasty.

On Sunday afternoon I went to the home of the Pardon family. I really enjoy meeting them. There is also a connection to Birgit – she used to teach in a school run by the Pardons! Lots of catching up on news. Inga teaches at a university in St. Petersburg and speaks fluent Russian. Another glass of sekt and a snack and more talk and then it was time to go. I hope we can have another garden party like that before winter arrives.