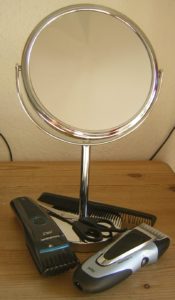 or not to beard, that is the question! I have changed a famous phrase to describe something that happened recently. It all began with a visit by The Boyz on Saturday. Bro2 then told me he was going to shave off his beard yesterday (Wednesday) I asked why and he said his mother wanted him to do it so he would look younger. He then said I could shave off my goatee beard as well.

That was a big change for he has always said I should keep my beard for it shows that I am an Opa (Grandfather). I only grew it when he kept asking me to do so. Here is what he wrote in an Email yesterday.

“Hi Opa John – I will shave my beard in five minutes and I think its a good idea if you also shave your grandpa beard. All the best Opa.” I’ve asked him to send me a photo of him without his beard. I wonder if he will look younger!