Another week has rolled by with no major changes here from my last posts. We had snow and winter weather a 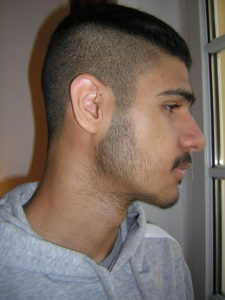 nd now it is forecast to change into Spring over the weekend. Big news is the meeting of Frau Merkel with heads of state governments yesterday evening to discuss what to do next against the carona virus threat. The number of people with the virus has increased a lot recently hence the meeting. They talked until 2.30am then press statements were issued. In short it is that Lockdown will be extended and more limits on people meeting plus shops closed including the Easter period.

Last Sunday Bro2 visited me for an English lesson. He only spoke English including periods of free speaking. He brought 8 pages of text I had given him at the end of his last visit. He had completed all and so I checked them as he talked and read new texts I had prepared for him. The focus was on pronunciation.  As usual he said he was hungry after some time so I put a nice vegetable dish into the oven and he really enjoyed it. When he arrived he was wearing a cap. He took it of with the words, “Do you like my new haircut?” I did and said so. He smiled and said he thought I would say that. I liked the short cut on the sides which merged into his short beard. But, his girlfriend likes him with longer hair. I wonder what she will say when she sees him! Now to relax and do some German homework.

UPDATE: Frau Merkel has anounced that the decision about the Easter holiday period was wrong and has cancelled it. She has also apologised to the German people! The sun is shining so I am going for a walk.