It’s snowing – again. Light snowstorms and minus temperatures dominate the weather here and since last week. Last Thursday there was a heavy snowfall which stayed on the ground for nearly a week. See the 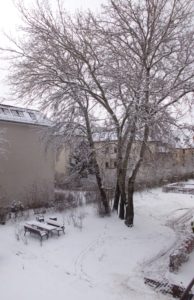 photo taken in my garden the day after. It stopped me from doing my usual walk around the garden to get a little exercise and a change from sitting at home all day. 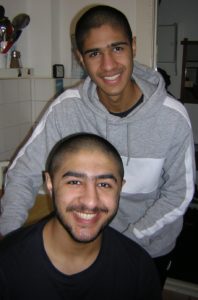 in order to avoid contact with other people and the risk of getting the Corona virus. It seems that the virus in now changing into other varieties. This means that scientists have to make changes to the anti-viruses developed so far. I’m sure this is the situation in the country where you live. There is a shortage of vaccine here so I have no idea when I shall get a letter telling me to go to a vaccine-centre for a jab. Watch this space!

I had visitors last Sunday. Yes, the Boyz rang the bell and gave me a surprise as I opened the door. Both had very short hair and Bro2 had shaved off his beard and moustache. I was only expecting Bro2 but it was nice to see the big brother as well. He did some homework as I started an English lesson with Bro2. This time it was reading from a text I had prepared. The focus was on new vocabulary and pronunciation. English is not phonetic so making the right sound is important for effective communication.

Later I heard the ‘magic words’ : ‘Opa I am hungry’. No surprise there! I had bought some pizzas and so they added grated cheese and put them in the oven. Lots of happy munching as they cleared their plates and followed up with a pudding. Then they wanted to relax by watching a DVD and that is how they completed their visit. Here is a photo of both with short hair.