Special day today. Trump is leaving the White House and Biden is moving in. Time to celebrate. Adrian beat me to it. Here is a photo of him with a nice bottle of Gin. I shall join him with a G&T later this afternoon when I turn my TV on and see Trump getting int 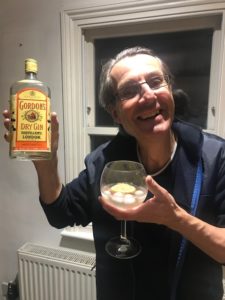 o Airforce One and flying to his golf course in Florida. I still wonder how 70 million Americans could have voted for him in the recent election. That is nearly half of all who voted. I hope he is not able to stand again for election in 4 years. Another dose of Trump ….. ohhhhh nooo!

What have I been doing since my last post? Actually not a lot. In Germany we are in a tight lockdown and the government said yesterday it will extend to mid February. Just put BBC Radio on and heard that he is about to leave the White House for the plane. Later I shall switch to BBC World Service on my TV to catch up on the news. Back to my week – again nothing special to report. Johanna came over last Saturday to help me with paperwork. Later Bro2 arrived to relax and practice more English. It was nice to see him again and catch up on family news.

On Sunday I was invited to lunch and it was very tasty. Monday and Tuesday was spent at home with limited walks around the garden because of snow storms. Today I went to my bank and then did some shopping at Aldi. I like that shop.  Nothing planned for the rest of the week except for two meetings at the weekend but using the Zoom platform. Hope you are coping with changes due to the coronavirus. I’m still waiting for a vaccination appointment. Alan sent me a note to say he is having the injection today. Hope all goes well. Have a nice rest of the week.