I’m sitting next to my TV screen and listening/watching a concert. It is the traditional New Year’s D 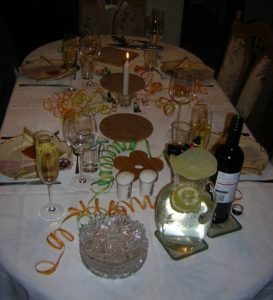 ay one featuring the Vienna Philharmonia playing in their very nice concert hall. I was in this building twice. The first time to watch a Mozart opera and the second to see a mainly Beethoven concert. I really enjoyed both. There is no audience because of the coronavirus risk but we are sometimes taken into the gardens and palaces of the ex-Kaisers to watch dancers swirling around. The musicians are also clearly enjoying playing their instruments. As usual there is a lot of Johann Strauss music in addition to Liszt. The concert is relayed around the world- in 90 different countries – and is now a traditional part of starting a new year.

I saw in the New Year by falling asleep inspite of the bangs outside and whoooosh of rockets before exploding overhead. I also slept late and feel better for that. They are now playing The Blue Danube Walz by Johann Strauss Junior. Very famous piece of music and it means the concert is drawing to a close. I met my Ko-Gang yesterday evening and they said they would be watching the concert. We had a very tasty ‘end of year’ meal with wine and interesting conversation. Here is a photo of the dining table taken just before the food arrived. Hope you are enjoying the start of a new year and can relax for the rest of the day.