The telephone rang an 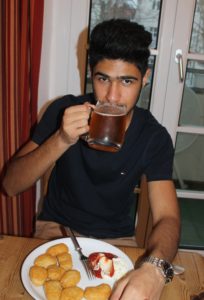 d a familiar voice said, “Hello Opa, how are you?” Yes, it was Bro2 from The Boyz. He said we had not met in weeks and could they visit on Saturday. I told them it was no problem and asked if they had any college homework to do and needed help. He said not but Bro1 had and needed help. They arrived a little early and it was nice to see them again. They looked well and I noted Bro2 now had a beard, yes joined up under the chin. Bro1 has had a full beard for some time and it suits him. 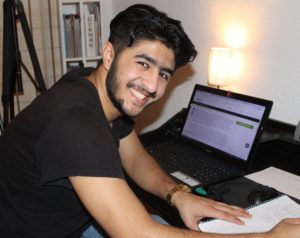 nk. They chose cola and beer with no alcohol to drink and small chicken breasts to cook for late lunch. Bro2 wanted to practice his English and during the visit he only spoke English! I put him in front of the TV to watch/listen to BBC News reports then turned my attention to Bro1. His homework included writing pro-contra-neutral comments to various topics. He had written positive and negative ones at home but did not know how to write neutral ones.

I switched on the laptop for him to work with and withing a few minutes had found information about structures for setting out different forms of argument. We discussed this for some time and he said he could now write something. I told him to do that while I went to Bro2 and discussed what he was seeing/hearing in the BBC programmes. And so the afternoon went by with only a break for lunch prepared by Bro2. By early evening Bro1 said he had written his texts and sent them off to his college. Big smiles all round as they relaxed and felt they had acheived something in both text analysis and using English. They left with happy faces and I was happy that I had been able to help them.