I spent last Saturday afternoon with my Kowalke-Gang. Three of them live in the same block so it is not difficult to meet up. This time Martina was the host and prepared a delicious lunch of chicken breast, rice, potatoes and redcabbage. There was red and white wine o 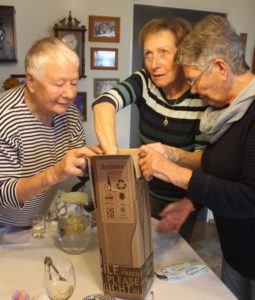 n offer. I sipped white wine with the chicken. This was followed by a pudding and then lots more chat until the clock showed it was time for ‘Kaffee und Kuchen’ which went down with more talking. Earlier I had received a package from Ian in Sydney. I guessed it was to show sympathy for my accident. When Johanna saw it she thought it would contain wines from Australia. She asked me to bring it to the Ko-Gang lunch so opening  it could be shared with others. I did just that. I got behind my camera and here you can see the result. Big surprise was that it was not wine but a bottle of Irish Whiskey. Fortunately we had enough win 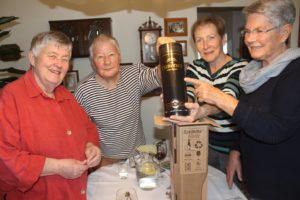 e so didn’t open it. Ian wrote ‘Gute Besserung! and ‘Schöne Grüße’ which was very nice of him. ‘Schöne Grüße’ to you Ian and thanks for my present. I’m sure Johanna and I will sip it with a cup of tea as the days lengthen and it gets colder.

On returning home that evening I put on my TV. I am a fan of the national football team and enjoyed their game. They won 3:1 against Ukraine but I thought the Ukraine team played very well, particularly in the first half of the game. And so ended a very pleasant day. Next day was a lazy one for me. Mainly reading.