It all started here two weeks ago. Two hours after this photo was taken I was lying on the platform for a tram to the S-Bahn station at Rahnsdorf. It is a village to the east of Berlin. In the photo you can see me with most of the Muggelsee Gang. One is behind the camera and two others had appointments so could not join us for a reunion. I have posted about them before and am very pleased that we keep 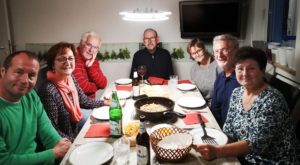 in touch after so many years.

We met in a training centre on the north side of lake Muggelsee in 1993. Wow…so many years ago! They were improving their English and in a few cases learning it from ‘scratch’. They previously worked in the GDR and most spoke Russian. I left the centre after a few months but we still kept in touch with each other. All subsequently got good jobs, two married each other and had twin daughters who are very musical. We usually meet for cycle rides, picnics, concerts and in restaurants.

Harald decided to host a meeting and we met at his home. Lots of talking, snacks and different wines. Very nice and then the evening set in. We went our different ways. Harald wanted a walk so came with me to the tram platform. There I stepped on a large stone which tilted to the left and threw me to the ground. Fortunately Harald was there to help me and shortly after I entered the tram, then the S-Bahn with blood pouring from a head wound.. Five different people offered to help on the way which was very nice of them. The rest you can read in other posts and see the photos. I’m pleased to say that I am making steady progress.